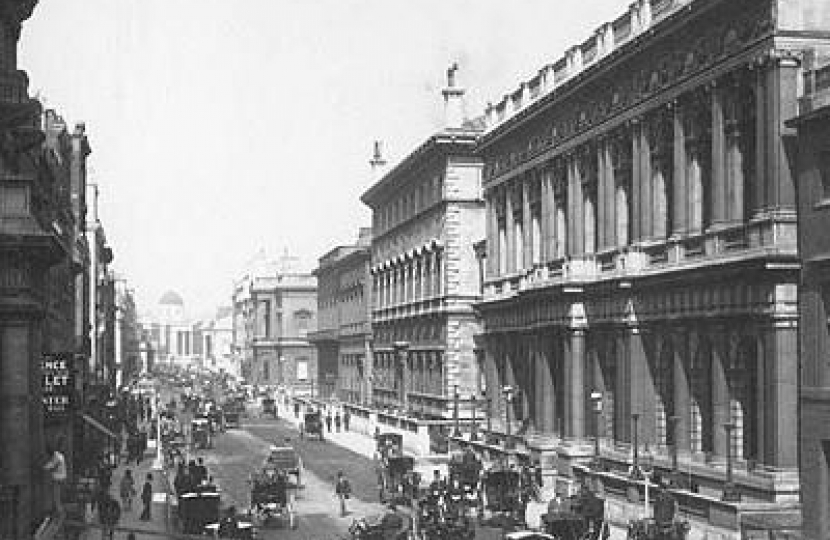 Between December 1916 and October 1922 the Conservative Party (known at this period as the Unionist Party) was the largest partner in a coalition government led by Lloyd George. The government fell on 19 October 1922 after a famous meeting of Unionist MPs at the Carlton Club. The MPs voted to withdraw from the coalition and fight an impending general election on their own.

At a dinner at the Carlton Club in St James’s Street on 22 February, Alistair Lexden, the Club’s historian, recalled the famous meeting—the circumstances in which it was held and what happened at it. The text of his speech follows.

The famous meeting took place in the huge central hall of a very large rectangular building of little architectural distinction in Pall Mall. It stood next to that great bastion of Liberalism, the Reform Club, from which it was separated by a narrow road, quite insufficient to prevent members of the two Clubs trying to spy on each other’s political activities.

The Reform was to lose its closely observed Tory neighbour in 1940 when a Nazi bomb damaged the Carlton severely. The Club found first a temporary, and then a permanent, home in this early nineteenth century building, which happened to be empty in its hour of need.

Almost all Unionist MPs were members of the Carlton in 1922, as indeed they had been since its establishment at the time of the Great Reform Act, ninety years earlier. Many meetings of parliamentarians had been convened on its premises, but none so momentous as the one held on 19 October 1922.

The Man who Convened the Meeting

The meeting was called by the Unionist Party leader, Austen Chamberlain, eldest son of the great radical Joe, and the repository of all his father’s hopes for the future. He was to be the Chamberlain who reached 10 Downing Street. In October 1922 he had only held the Unionist leadership for some eighteen months, but a long parliamentary career stretching back thirty years, much of it in high office, meant that he was a politician of immense experience.

His Carlton Club meeting was supposed to bolster his leadership, but things worked out very differently. Long experience did not save him from committing serious mistakes.

His mistakes stemmed from his belief that the Unionist Party needed to be ruled with a firm hand. He did not brook argument or dissent. He never thought it necessary to seek the opinions of Unionist MPs outside the cabinet, still less to consult the Party in the country. It was for him and his senior colleagues in the cabinet to take the decisions, and for the Party to abide by them.

This dictatorial style of leadership had the full support of his closest cabinet colleagues, who were also the cleverest men in the Party: Arthur Balfour, cold-hearted intellectual and a former prime minister; the imperious Foreign Secretary, George Curzon; and F.E. Smith, Lord Birkenhead who combined a well-publicised venomous wit with a quick, well-stocked mind.

Above all, despite a certain waywardness on Curzon’s part, these clever men were convinced that their Party must remain in coalition with Lloyd George and his group of Liberal MPs, perhaps with a view to fusion at some future point. That, they insisted, was essential in the national interest. Country must be put before Party, always a dangerous position to adopt in a system where party political divisions run deep.

Throughout 1922 Chamberlain and his clever associates were totally unable to deliver success. The coalition floundered in a sea of troubles which got worse as the months passed. A highly controversial Treaty, designed to end Irish republican violence, ran into difficulties. The summer brought the worst scandal involving the sale of honours, forcing Lloyd George to set up a Royal Commission. In September the country suddenly found itself, bereft of serious allies, on the brink of war in the Middle East.

The Threat from Labour

A high price was paid for failure. By-elections invariably brought comfort, and often joy, to the Labour Party. For years Unionists had been haunted by the spectre of a Labour general election victory, and the creation of a socialist state in Britain. That prospect now became an all-absorbing obsession. With a general election due no later than November 1923, all manner of schemes involving different combinations of Unionists and Liberals were devised to defeat Britain’s looming red menace, providing Maurice Cowling with the material for his great seminal work of high politics, The Impact of Labour.

However they viewed the best means of keeping Britain out of the hands of left-wing revolutionaries, by the autumn of 1922 most Unionists agreed that salvation would not be assisted by fighting another general election in partnership with Lloyd George, who had forfeited their trust and respect. Time and again this was made clear to Chamberlain and his clever cabinet colleagues. The bearers of such tidings, including a substantial group of junior Unionist ministers, were sent away with a flea in their ear.

Chamberlain remained absolutely convinced that his Party could not defeat Labour at the polls on its own; it could only win in alliance with Lloyd George and his group of Liberal MPs, he kept repeating with mulish obstinacy. As an observant peer pointed out, ‘without personal magnetism himself, he was very susceptible to it in others’. He was under the Welsh wizard’s spell.

Chamberlain believed that, despite widespread restiveness throughout the Party, he might nevertheless prevail if he could persuade a majority of his MPs to support him. That is why he summoned them to the Carlton Club on 19 October 1922, along with peers who were members of the government and therefore likely to back him.

Surprisingly, in view of the gloom enveloping the Unionists at Westminster, the meeting opened very convivially. ‘We assembled at eleven, a thoroughly good-humoured crowd’ Lord Crawford, a coalition minister and former Chief Whip, recorded in his brilliant diary. ‘We were just about to begin when a waitress advanced with two immense brandies and soda to lubricate Chamberlain and F.E. Much cheering and a good deal of merriment’.

The little-known Stanley Baldwin, a recent Cabinet appointment, made the decisive speech—‘ gulping and hiccoughing’, according to Crawford—which put into effective words what so many felt: that Lloyd George was a malign, dynamic force, from whom Unionists must dissociate themselves. The coalition’s death knell was sounded by Chamberlain’s predecessor as Unionist leader, Andrew Bonar Law, who after much agonising had brought himself out of retirement, his face ‘ worn with distress’, in Crawford’s account. ‘After his speech’, Crawford continued, ‘the issue was unmistakable and he was hailed as Leader of the Party’.

Chamberlain insisted on a vote which he lost by a margin of a hundred. His abject failure, guaranteed by a misjudged speech---‘very rigid and unbending, needlessly so’, in Crawford’s words-- at the meeting, put an end to a Unionist Party crisis which, unresolved, would have sent the Party into a general election in a deeply divided state with disastrous consequences. Sir George Younger, Unionist Party Chairman, said Chamberlain ‘thoroughly deserved the defeat he has sustained’.

Chamberlain inevitably brought Lloyd George down with him. Bonar Law, whose retirement in 1921 had opened the door for Chamberlain, resumed the Unionist leadership and led the Party to a large majority at a snap election in November 1922. But the future belonged to the unexpected star of the Carlton Club meeting, Stanley Baldwin. Within two years, he established a Tory ascendancy in British politics which lasted eighteen years and would have continued longer but for the Second World War which turned Churchill from a political exile into the prime minister of another coalition.