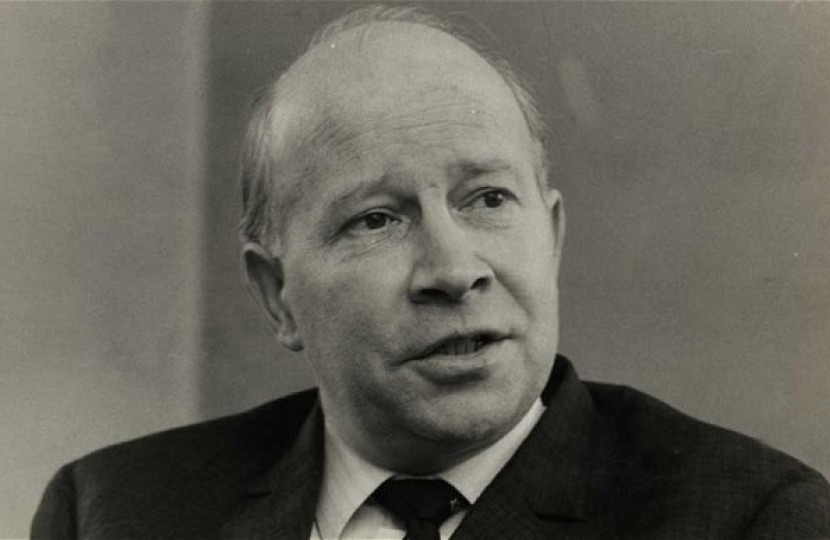 Robert Porter was a leading Ulster barrister, known for his wit, singing and joie de vivre as well as for his formidable learning, who appeared in both criminal and civil cases with equal success before becoming one of the most popular and highly regarded county court judges in Northern Ireland. It was once said of him that “ he never flinched from hard work and never missed a party”.

In the late 1960s his large legal practice was given second place to politics. A strong desire to help the Province he loved overcome its deep divisions led him to stand for the Stormont Parliament in 1966 as an ardent supporter of the incumbent Unionist Prime Minister, Terence O’ Neill , who had taken up the cause of reform. He became the last person to be returned for a university seat in the United Kingdom. Though university representation ceased at Westminster in 1950, Queen’s University in Belfast retained four MPs at Stormont until 1969. Porter was successful in the final contest to be held in the university, a by-election in November 1966 when he had a majority of 749 over his Liberal opponent. When his seat disappeared at the 1969 Stormont election, he moved to the newly created constituency of Lagan Valley where he was returned unopposed . His adoption there was denounced furiously by Ian Paisley and his rising political apprentice, Peter Robinson, because he had recently attended the funeral of Catholic high court judge. Porter delivered a ringing defence of his decision to honour the memory of an esteemed colleague at his adoption meeting, receiving a standing ovation.In a private note that he made at the time he recorded his suspicions that another leading barrister who coveted the seat had leaked the information.

As a Stormont MP Porter spoke out even more vehemently than O’Neill himself about the need to end the sense of alienation that so many within the Catholic community had felt for so long . At the outset of his political career he declared, “ I believe that regardless of creed, all who recognise Ulster’s constitutional position are entitled, as of right and on terms of absolute equality, to participate to the full in public life”. He sought out members of the Roman Catholic hierarchy and urged them to attend official state functions. In the Stormont bars he was to be seen in the company of Nationalists rather than fellow Unionists. He gave enthusiastic backing to reforms of the franchise, local government and housing that he hoped would mark the start of a new era of stability and fairness in Northern Ireland. He called for the creation of shared schools where Catholic and Protestant children could be educated together.

At the beginning of 1969 O’ Neill faced open rebellion within the Unionist party. Porter, his strongest ally, received rapid promotion. After just two weeks as a junior home affairs minister in January 1969, he entered the Northern Ireland Cabinet as Minister of Health and Social Services; in March he was appointed Minister of Home Affairs, retaining the post when O’ Neill was replaced as Prime Minister by James Chichester-Clark in May 1969. He was perhaps the ablest man ever to occupy that office.

By a cruel irony this liberal and progressive lawyer found himself at the centre of political events just at the moment when the hopes that had been placed in the reform programme collapsed and an ever worsening security crisis began. In August 1969 widespread and prolonged disorder in Londonderry and Belfast compelled him to call on the army to assist the exhausted Royal Ulster Constabulary and the Ulster Special Constabulary, the “ B Specials”, to whom the Catholic community was strongly opposed. Porter was reluctant to deploy this part-time force which had not been trained for riot control, but Harold Wilson’s government refused to agree to the use of troops until it had been called out. The further deterioration in the security situation which followed its deployment showed that Porter had been right.

During the ensuing months he implemented far-reaching changes, agreed with the government in London, under which the RUC ceased to carry arms in the course of ordinary police work and the “ B Specials” were disbanded. Security policy passed increasingly under London’s control. Intransigent elements in the Unionist community denounced the Stormont government. Porter was the object of particular hostility. Opening the door of their Belfast home one day when their security guard was briefly absent, his wife was confronted by a masked man with a revolver. “ If I can get this close to you”, he told her, “ think what could happen to your husband”.

The work was intense and unremitting .A complex Public Order (Amendment ) Bill involved Porter in some of the longest debates ever held at Stormont. He also carried through a highly contentious Prevention of Incitement to Hatred Bill. At the time of his appointment as Home Affairs Minister, he had made it clear that he would not occupy the post for long. Neglect of his legal work brought a sharp drop in his income and he had a young family to support. He gave Chichester-Clark a firm indication of his intention to quit at the beginning of 1970 and finally tendered his resignation on August 26, 1970 when unsurprisingly he was, in his own words, “at a low ebb physically and morally” . Accepting his resignation, Chichester-Clark told him that “throughout these difficult times—perhaps the most critical in the history of Northern Ireland –you more than anyone else have had to carry an appalling burden of responsibility”. Some attributed his resignation to his annoyance at not being consulted over the imposition of a curfew on the Falls Road in Belfast; he always denied it. The Roman Catholic Archbishop of Armagh, Cardinal Conway, was among those who wrote to him on his resignation.

He was knighted the following January. He remained an active MP until the suspension of Stormont and the introduction of direct rule in March 1972 which, unlike most of his party, he accepted. A complete breach followed. He resigned from the Unionist party in June 1972 and in March 1973 joined the recently formed Alliance Party with whose policies for cross- community partnership he was in complete accord. He resigned his Stormont seat at the same time and did not stand for election again. He never ceased to emphasise the importance of accepting the existence of two traditions in Ulster and working for their reconciliation. “ I’m Irish”, he declared in 1978, “ but I’m also proud to be British”.

Robert Wilson Porter, who was born in 1923, was known everywhere in Northern Ireland as ‘ Beezer’, the affectionate nickname deriving from the response that he gave as a young child to anything that pleased him. He always described himself as a Derry man; his devotion to his native city never wavered. Given half the chance he would break into a rousing refrain from a favourite song which compares London’s Ludgate Hill unfavourably with Derry’s Shipquay Street. “ Do you call that thing a hill,says I ? Well, if you will come so far I’II show streets in Derry that are perpendicular!”

He was the eldest of four children of Joseph Wilson Porter, a joiner, and his wife Letitia, ne`e Wasson. He was an outstanding student at the Londonderry Model School and Foyle College. A foundation scholar at Queen’s University, Belfast where he matriculated in 1941, his legal studies were interrupted by war- time service in the Royal Air Force Volunteer Reserve from 1942 to 1946 which included a stint in South Africa where he qualified as a pilot before becoming a flight engineer on Lancasters. He finally graduated with a first in law in 1949; he was called to the Northern Ireland Bar in 1950. His salary of £100 a year as a part-time law lecturer at Queen’s which helped sustain him in his first years as a barrister was soon dwarfed by the large earnings that flowed from the substantial practice in both criminal and civil law that he built up. He was first vice-chairman (1959-61), and then chairman(1961-66), of the War Pensions Tribunal for Northern Ireland . He was junior crown counsel in Derry from 1960-63; counsel to the Attorney- General for Northern Ireland in 1963; and junior crown counsel in Co. Down in 1964 -5, appearing in a number of prominent murder trials in the days before Ulster’s descent into civil strife. He became a QC in 1965. After his return to the bar following his departure from government, he was appointed senior prosecutor at Belfast crown court and in that capacity secured the conviction of 26 of the most hardened UVF terrorists in March 1977 after an immensely complex six-month trial.

He quickly came to be regarded as a model county court judge after his appointment to the bench in 1978. The current Attorney-General for Northern Ireland, John Larkin, has described him “as the fairest and wisest county court judge of his generation in cases of all types”. His deep humanity was frequently displayed. In a the trial of a man who had been treated outrageously by his employer and then stole a small sum of money, Porter made a point of inquiring carefully into the defendant’s terms and conditions of work and when ordering an absolute discharge was heard to observe “ sometimes I think the wrong people end up in the dock”. The tributes paid to him by his colleagues at the bar when he retired in 1995 ( after two years as Recorder of Belfast) made reference to his “ great qualities of kindness, patience and humour” but went on to note that “ where circumstances required it, severe punishments were imposed”.

No one could have been further removed from the dour Ulsterman of popular stereotype. He numbered the Belfast painters, William Conor and Markey Robinson, among his friends. He relished the plays performed in Belfast’s two avant garde theatres. When an English woman visitor uttered an expletive over dinner in mixed Ulster company where they are never heard , he immediately sought to lessen her embarrassment and distress by dropping casual expletives into his own conversation as if nothing could have come more naturally to him. He never needed much encouragement to break into song. As his daughter Kathryn said at his funeral, many will have as their abiding memory of Beezer Porter an image of him standing beside a piano with a whiskey in his hand and twinkle in his eye, giving a hearty rendition in his fine baritone of a song by Percy French, probably ‘Slattery’s Mounted Fut ‘, a particular favourite.

Robert Porter and his devoted wife Margaret, a doctor who chaired the Northern Ireland branch of the Muscular Dystrophy Association and carried out some important research into cot deaths, had one son and two daughters. During his career as a solicitor Robert represented Sir Richard Branson in both his bids to run the National Lottery and also advised the Diana Princess of Wales Memorial Trust . Kathryn who has worked as a BBC producer in both Belfast and London is now a translator and freelance producer. Tragically the younger daughter Helen was killed in a motor accident a few days before her fourth birthday.

Photograph courtesy of The Telegraph.