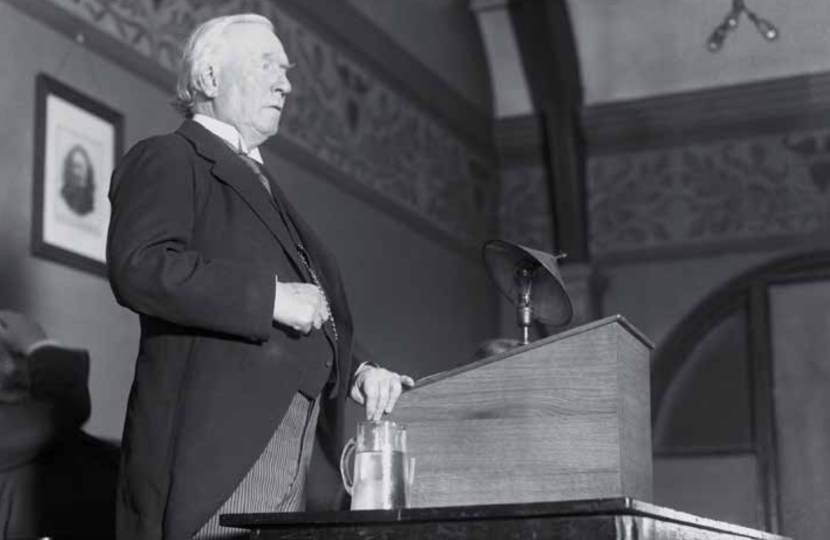 As a historian, Alistair Lexden is often asked: “what precedents are there for today’s extraordinary, long-running political crisis?”

Bitter divisions between individual politicians, and between political parties, are nothing new. The country too has been sharply divided, and the authority of Parliament has been challenged by protest movements on several occasions over the centuries.

However, there has only been one previous occasion—just before the First World War—when Parliament has been completely deadlocked, and unable to settle the greatest political issue before the country.

Alistair Lexden explored the similarities—and the contrasts—between the two cases of Parliamentary paralysis in an article published in Parliament’s House Magazine on 3 June.

The Prime Minister struck a note of deep gloom, declaring that “the idea of a compromise was regarded with growing disfavour and suspicion”. The Government had pledged to end a severe, long-standing sense of grievance by enabling those affected by it to take back control of their affairs, which had been wrested from them decades earlier. Their opponents believed that no change was needed.

The Government’s proposals to give back control had failed to secure Parliamentary approval  more than once. Extensive talks had taken place between the political parties, both informally and around the conference table, but no agreement had been reached . The Government’s freedom of manoeuvre was severely limited since it depended on the votes of MPs from across the Irish Sea.

The Opposition insisted that a general election must be held before anything was finally decided. The Government was adamant that a solution must be found in the current Parliament.

In the Commons insults flew. The upper house was no less restive. Much the same speeches were made over and over again. Throughout the UK, divisions intensified. Those on opposing sides ceased to meet socially. An alarming number of people in the north of Ireland  made clear that they were prepared to go to any lengths to get their way.

This was Britain in July 1914, on the eve of the First World War. Its resemblance to Britain in May 2019 is obvious. Events just over a hundred years ago provide the closest parallel with those today that modern political history affords.

There have, of course, been other very serious crises. Severe violence flared up in parts of the country as politicians argued over the first Reform Bill in 1831-2. The Tory Party broke in two as a result of Robert Peel’s courageous decision to establish free trade in agricultural products in 1846. Forty years later Gladstone broke the Liberals over Irish Home Rule.

These events feature prominently in everyone’s lists of great political misfortunes. But the crises of 1914 and 2019 are in a class of their own. Both were the product of rancorous disputes that had dominated parliamentary life for several years.

Brexit has poisoned politics since 2016. Irish Home Rule, brought back into the forefront of parliamentary politics by Asquith in 1912, continued with ever-increasing bitterness the feuding between the political parties that went back  to the crisis over the role of the House of Lords, which had begun with Lloyd George’s People’s Budget in 1909. Mutual recrimination had become a long-established habit.

July 1914 and May 2019 share one characteristic above all. They are the only two occasions  on which our political system has been reduced to total deadlock. No one in July 1914 could find a way out of it. Nor can anyone in May 2019.

There are some striking contrasts, as well as marked similarities, between these two episodes of unequalled strife. During the first, it was the Tory-dominated Lords, not the Commons, that kept throwing out the government’s measure to enable Ireland to take back control of its affairs. But the lower house witnessed some of the worst scenes of disorder in its history: Asquith was howled down, and sittings had to be suspended on a number of occasions by a Speaker, who never forfeited the respect of any part of the House during times of extraordinary difficulty.

Today, it is widely believed, especially among Tories, that the departure of the prime minister is the indispensable first step if deadlock is to be broken. In 1914, no one called for Asquith’s resignation,  though he was criticised for putting off important decisions(“ wait and see” were his watchwords). The Tory leader, Andrew Bonar Law, enjoyed the complete confidence of Tories, denouncing the Government with a fervour that would have won the ERG’s admiration.

In 1914, there was no question of the monarch keeping out of politics. King George V was in close touch with  all sides as tension mounted. At one point he told Asquith that he might not give his assent to the Home Rule legislation while the deadlock persisted. Asquith replied: “Such a thing had not been done since the reign of Queen Anne and would inevitably prove disastrous to the monarchy. His Majesty could, however, if he chose dismiss his ministers.”

Instead of doing that, the king summoned all the political leaders to a conference at Buckingham Palace on 21 July 1914. “It is”, he wrote, “a pleasure to me that the conference will take place in my house, where I shall gladly welcome its members.” Who could imagine today’s constitutional monarch doing such thing?

Could this conference, which was chaired by the Speaker, find a way of reconciling a devolved parliament in Dublin with the insistence of Ulster’s Unionists, backed by the Tories, that they must be kept outside it? The partition of Ireland was agreed in principle, but not the extent of  the area that would remain under Westminster’s direct rule.

Civil war loomed across the Irish Sea where a paramilitary Ulster Unionist volunteer force, some 100,000 strong, was matched by a growing force of Irish Nationalist volunteers. Bonar Law had earlier given a firm pledge: “I can imagine no length of resistance to which Ulster will go, which I shall not be ready to support .”

The Cabinet met to review the situation after the breakdown of the conference at Buckingham Palace. An even graver crisis was now to release them from what had seemed perpetual political deadlock.  Churchill wrote later: “The discussion had reached its inconclusive end, and the Cabinet was about to separate when the quiet grave tones of Sir Edward Grey’s voice were heard reading a document which had just been brought to him from the Foreign Office. It was the Austrian note to Serbia. The parishes of Fermanagh and Tyrone faded into the mists and squalls of Ireland.”

A border was finally drawn in Ireland a few years later after Tories and Liberals had come together in Lloyd George’s coalition government . It represented the destruction of the hopes of Liberals like Asquith who had written: “nothing must be done to erect a permanent or insuperable bar to Irish unity.”

Northern Ireland was brought into existence. It would become the central feature of political deadlock in 2019 when Mrs May foolishly agreed to the EU’s terms for an Irish backstop, for which many Tories will never forgive her.

Alistair Lexden is a Conservative peer and historian. His publications include Ulster: The Origins of the Problem.