The new political world created in 1918 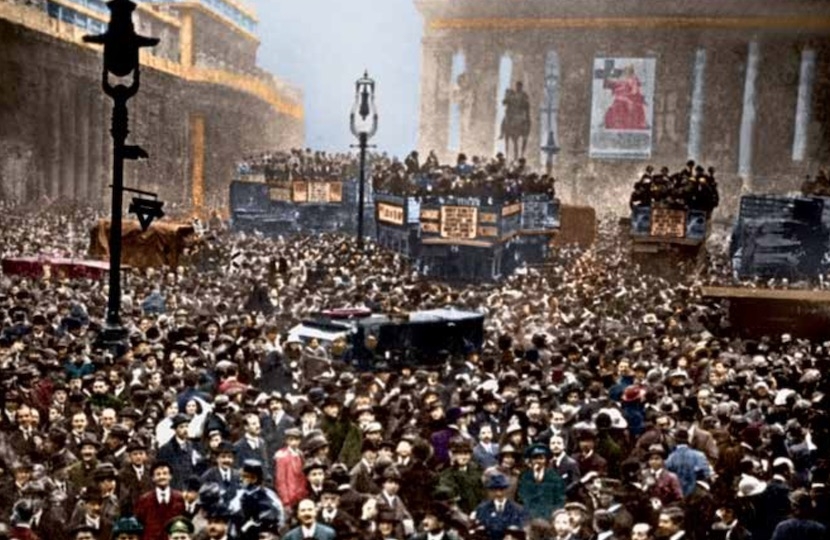 Alistair Lexden was asked to write an article about the political aftermath of the First World War for Parliament’s House Magazine. The text of his article, which was published on 12 November, follows.

Throughout his reign King George V dutifully wrote up his diary at the end of each day. On 11 November 1918 he recorded that ‘today has indeed been a wonderful day, the greatest in the history of the country.’ Time and again, he had been brought out on to the balcony of Buckingham Palace at the insistence of enormous, cheering crowds.

According to Britain’s representative at the Armistice negotiations in Compi`egne, Admiral Sir Rosslyn Wemyss, it was the King who ensured that the Armistice came into effect  at the eleventh hour of the eleventh day. The Prime Minister, David Lloyd George, had instructed Wemyss to arrange for it to start at 2.30pm so that he could announce it in the Commons. But the Admiral telephoned the King from France, proposing the eleventh hour to underline the historic significance of the event. At the monarch’s suggestion, the time was changed to 11am. Lloyd George was furious.

Only one thing marred the King’s contentment on that wonderful day: his Prime Minister’s insistence that an immediate general election should be called. The two men had never got on. The fair-minded monarch was appalled that victory should be exploited for electoral advantage, but there were no constitutional grounds on which Lloyd George could be refused.

The country was now taken into an entirely new electoral era. A reform act, passed earlier in the year, had extended the franchise to more people than all the nineteenth century reform acts put together. By giving the vote to all men over 21(with a further reduction to 19 for those who had seen active service) and to women over 30 who had property, Parliament increased the electorate from 7.7 million to 21.4 million. Mass democracy suddenly arrived in Britain. Most of those who voted in 1918 did so for the first time. Postal and proxy votes were introduced for all members of the armed services, but for no one else(civilians had to wait another thirty years).

In 1918 Lloyd George’s reputation was at its height. Throughout the country he was hugely admired for his vigour and political versatility (underlined by his nickname ‘the Welsh wizard’) , though not, in all quarters, for his personal morality. The general election which the monarch reluctantly granted him took place just a month after the Armistice on 14 December, with polling confined to one day for the first time in British history. He sought a resounding triumph for the coalition government which he had led with skill and brio since December 1916—and which brought together his section of a now permanently divided Liberal Party and the Unionist Party (as the Tories were then known).

He got his triumph. Letters of endorsement were sent by Lloyd George and the Unionist leader, Bonar Law, to all candidates favoured by the coalition. Their chief opponent, Asquith, referred derisively to the letters as coupons, and the term of abuse was swiftly applied to the contest as a whole; it passed into history as the coupon election. 478 candidates were elected with the aid of their coupons, giving the coalition an overwhelming majority in the new House, increased still further by the absence of 73 Sinn Fein members.

The election is widely thought to have been dominated by fierce demands to punish the defeated enemy. There were certainly calls to ‘hang the Kaiser’ and ‘make Germany pay’. They came mainly from the popular press which tried hard to work up a mood of national vengefulness, in which it  had some success. But Lloyd George gave it little encouragement. Only in an off the cuff passage at the end of his final campaign speech did he call for Germany to be made to pay the cost of the war it had caused. He was entirely content that the Kaiser should live on in comfortable exile.

The political leaders responded to the sudden arrival of mass democracy in 1918 by putting forward substantial proposals for social reform. They were prominent in the joint manifesto that the coalition parties produced. ‘ One of the first tasks of the Government’, it proclaimed, ‘ will be to deal on broad and comprehensive lines with the housing of the people’. No less important were the creation of ‘ larger opportunities for education and the prevention of degrading standards of employment’.

Lloyd George and his colleagues meant what they said. After the election, one of the Prime Minister’s closest and most effective associates, Christopher Addison, took the housing problem firmly in hand as Minister of Reconstruction, building 213,000 homes in the next two and a half years, many with government subsidies, while lamenting that  the pace was  not even faster to give more  heroes of the war homes that were fit for them. The new Ministry of Health, established during the war with cross-party support, was also the beneficiary of Addison’s reforming zeal.

One of the great Education Acts, passed in 1918, brought teachers much improved pay, raised the school leaving age from 12 to 14(with discretion for local authorities to put it up to 15), and, in Lloyd George’s words, created powers so that ‘ the State can watch over the welfare of its children through infancy and adolescence.’

The greatest of Lloyd George’s measures in the new era of mass democracy, however, was the extension of insurance against unemployment. In 1911when he first  introduced it, some three million workers were covered; his post-war government extended it to virtually the entire working class and so transformed British economic life. It was one of the great milestones in the onward march of the welfare state.

Subsequent governments, many of them Tory, would improve and extend the welfare services that the newly enfranchised millions wanted in the inter-war period. Pressure from the Labour Party, with its steadily increasing strength in the Commons, played its part. But it was the Welsh wizard who set British politics on its new course at the election of December 1918.

Alistair Lexden is a Conservative peer and historian