The King, the Prime Minister and the Loss of the American Colonies 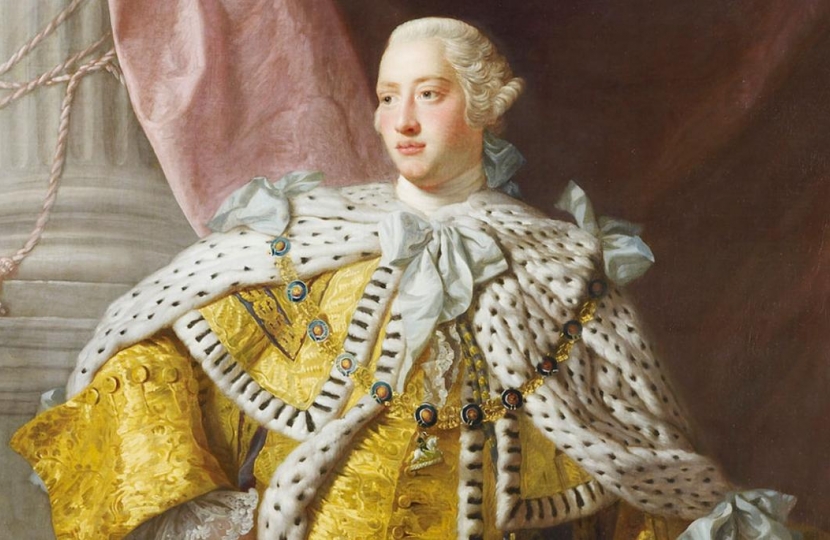 Last June Alistair Lexden hosted a dinner at the Carlton Club for a distinguished group of Americans, deeply involved in heritage and conservation projects, who were in England on a week’s cultural heritage tour with a particular emphasis on the late eighteenth century. He gave a brief address in which he referred more positively than is customary to two men whose reputations were so severely damaged by the loss of the American colonies.

History has not been kind to George III and his faithful Prime Minister, Lord North, who served him loyally for twelve years from 1770 to 1782. This is in part — as is so often remarked — because history is written by the victors. The losers’ weaknesses were remembered, their strengths forgotten.

They possessed many virtues including wide cultural interests, a passion for hard work and considerable political talent. Deeply interested in science, music and art, the King amassed a large collection of books which became the foundation of the British Library. The Prime Minister was a well-read classicist and Chancellor of Oxford University.

Both were in the prime of life when war broke out in 1775: the King was thirty-seven and the Prime Minister forty-two. Neither was troubled by ill-health; the King’s problems lay in the future. They both put in long hours. The King was up at 6 am to start work on government papers which occupied him most of the day, during which he sent clear views in writing on a vast mass of business to his ministers. He was an extremely active head of government, much more so than his two Hanoverian predecessors. This made him a controversial gure, long before the outbreak of war with America. Many accused him — wrongly — of wanting to weaken Parliament and concentrate power in his own hands.

The Prime Minister won and retained the King’s complete trust, essential for effective government at that time. They had known each other well since childhood. In politics, North won much praise on all sides for his economic acumen and stewardship of the public nances; he cut taxes and increased prosperity. His greatest strength was as a Parliamentarian. A contemporary described the Commons as his ‘theatre on which he acted the first personage, where he attracted almost all the attention... powerful, able and uent in debate,’ he spoke regularly for two hours without notes. He was a master of wit and humour. ‘It was impossible to experience dullness in his company,’ a political observer wrote. Up until his last months in office he retained a comfortable parliamentary majority over a deeply divided opposition. After his death he came to be described as a Tory; in fact he was not a party politician at all in the modern sense, but the monarch’s powerful parliamentary partner who enjoyed almost complete success until war broke out in America in 1775.

The King’s position throughout the seven-year con ict was clear and unwavering. The rebel colonies must be brought to heel. He stressed that he was ‘fighting the battle of the legislature’ so that it could pass laws and levy taxes in America just as it did in Britain. Without an American Empire and the trade which helped enrich Britain, the King believed that his country could not be ‘preserved from a state of inferiority and consequently falling into a very low class among the European states.’ He rejected calls from those in America who urged him to be ‘the loving father of your whole people,’ prepared to stand up to the Westminster Parliament on their behalf and work with their legislature on one side of the Atlantic as he worked with Westminster on the other (one Crown, two Parliaments).

At the outset of the war the Prime Minister was in full agreement. The conflict arose, he said, ‘from the desire of maintaining the constitutional authority of Parliament over the colonies’. But unlike the King he was prepared to compromise. In 1778 he proposed that the colonies ‘upon renouncing their claim to independency shall be exempt for the future from parliamentary taxation,’ thereby removing the chief grievance which had precipitated the con ict in the rst place.

Such a Prime Minister could not prosecute the King’s war with vigour and determination. Conciliation was his aim. Though the partnership between King and Prime Minister continued throughout the war, the Prime Minister’s heart was no longer in it. He was the most unsuitable person to be a war leader, though even so victories were won in America (a whole string of them in 1780). The Prime Minister constantly asked to be replaced, but the King was determined to retain him because he was so effective a parliamentarian and unequalled in his particular sphere of finance. North said he felt ‘under such obligations to the King that I can never leave his service while he desires me to remain and thinks I can be of use to him.’ There was no one of comparable ability to take his place. The two men lost the war not because they were incompetent or ineffectual or unwilling to work hard enough, but because they retained their partnership after they had ceased to agree on what the aims of that partnership should be.