'The Great Lord Salisbury' and the House of Lords 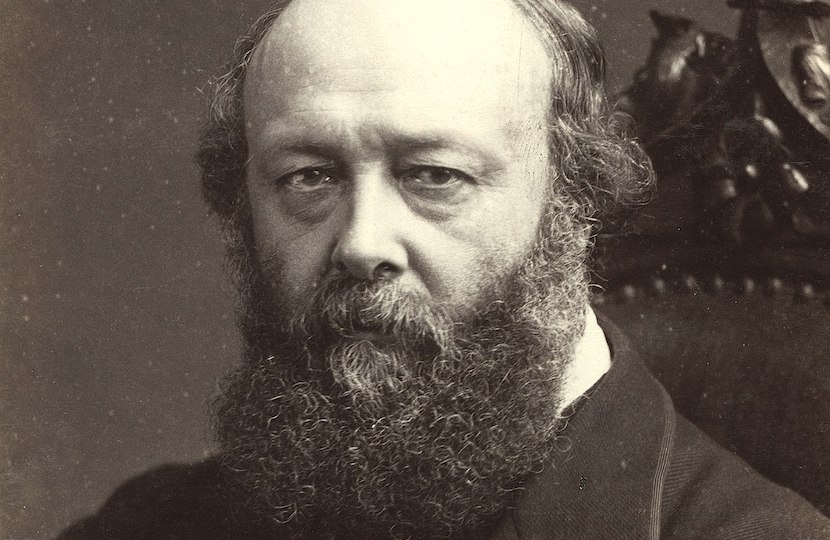 In this essay, which was noted in The Times on May 19,  Alistair Lexden reflects on how Lord Salisbury (1830-1903), the last prime minister to sit in the House of Lords, saw the role of the House and his proposals to reform it.

2021 has not only brought the 140th anniversary of Disraeli’s death in April 1881 (about which I have written elsewhere): in the following month, his successor, Lord Salisbury, then aged 51, began his 21-year stint as Tory leader, sharing power uneasily during the first four of them with Sir Stafford Northcote in the Commons, a man he had little difficulty in displacing to become prime minister for the first time in 1885-6. The longest-serving Tory leader, Lord Derby, who held the post for 22 years (1846-68) only narrowly surpassed him, though unlike Salisbury he was in sole command throughout.

The third holder of the Salisbury Marquessate (often given to using the French version, Marquis), he achieved lasting fame as ‘ the great Lord Salisbury’ and deservedly so: the most formidable intellectual ever to occupy the Tory leadership, he devoted his powerful mind chiefly to preserving Britain’s Union with the whole of Ireland, maintaining its pre-eminence in world affairs and enlarging its Empire, most notably in southern Africa ( where his name was long recalled), during a total of thirteen and a half years in power (1885-6, 1886-92, 1895-1902), frequently combining the Foreign Office with the premiership .

Assisted by the Liberal split over Irish Home Rule in 1886, he secured large majorities at three general elections while losing two by small margins (after which Irish Nationalist MPs held the balance of power), a record of Tory success unknown since Lord Liverpool’s uninterrupted premiership of fifteen years in the early nineteenth century. He never thought his governments’ social reforms, important though they were, contributed much to his long political ascendancy, and was puzzled that some people, like his Liberal Unionist colleague Joe Chamberlain, should have thought that they did. For his part, he was rather more interested in strengthening the constitutional role of the House of Lords.

Nowhere, during this glorious Tory era, was Salisbury’s ascendancy more evident than in the Lords, whose steadily increasing membership  reached nearly 600 by the end of his premiership. The last prime minister to speak from the red benches rarely failed to impress. Lady Monkswell, married to a junior Liberal minister, thought him infinitely superior to anyone on her own side—or elsewhere. In 1894 she recorded in her diary that he spoke ‘with a charm, finish and grace that no one else possesses.’ The following year she heard him make ‘a most brilliant and amusing speech ; he is certainly the best speaker in the Lords.’

Salisbury also won unstinting praise from Sir Henry Lucy, the leading parliamentary reporter of the day ,for his command of the House . In 1889, Lucy listened to him ‘ explain the details of the arrangement concluded with Portugal for the settlement of contending claims with Africa. It was an exceedingly intricate affair…precisely the case in which the most practised speaker would gratefully have taken refuge in a sheaf of notes. The Premier had not a scrap of paper in his hand as he unwove the tangled skein, and when he sat down, after talking for twelve minutes, he had made the whole case clear to the perception of the dullest lord in the assembly.’ Throughout, Lucy added, Salisbury spoke in an easy, conversational style, but ‘ with what command of his subject, what vigorous and well-ordered sentences, what irresistible argument, and now and then with what delicate, refreshing rain of cynicism.’ Salisbury knew how to avoid making great affairs of state sound unduly solemn or wearisome to their lordships –or to the country at large.

He gave much thought to the role of the House which he dominated  until his retirement in 1902, the year before his death. The nineteenth century produced no stronger champion of the constitutional rights of the Lords. Salisbury completely rejected Walter Bagehot’s influential contention that since 1832 the Lords had become ‘ a revising and suspending House’ with no more than ‘ a veto of delay’.  He exercised no restraining influence when the Lords found itself  in serious and sustained conflict with the  Commons---as it did in 1884-5 over the Third Reform Bill, and in 1893 over the Second Home Rule Bill for Ireland; on both occasions Salisbury carried the day, overwhelmingly so in 1893 with a majority of 378, the largest in the history of the Lords (a great crowd outside sang ‘ Rule Britannia’) .

From the moment  he entered the Lords in April 1868, Salisbury argued that it should be prepared to use its powers in defence of the  nation’s interests, which it should never leave  to the sole judgement the Commons. Speaking in the Lords in July 1868, he said: ‘ I am quite sure…you will never consent to act except as a free, independent House of the Legislature, and that you will consider any more timid or subservient course as at once unworthy of your traditions, unworthy of your honour, and, most of all, unworthy of the nation you serve.’ Though unelected, it had a direct responsibility to the nation fully equal to that of the Commons. In discharging it, the Lords had a right to demand that the people’s will should be tested in a general election to settle disputes between the two Houses on great national issues.

Salisbury readily accepted  the Lords’ ‘subordination to the nation’, but not to the Commons. This view of the constitution came to be known as Salisbury’s ‘referendal theory’ ,and it attracted widespread interest (along with widespread opposition among Liberals). It was put to the test most notably in 1868. Salisbury and the Conservatives in the Lords withdrew their fierce opposition to the disestablishment of the Anglican Church in Ireland when Gladstone won an overwhelming election victory on the issue.

This tireless advocate of the rights of the upper house was, however,  far from complimentary about most of its members, even though they provided him  with an impregnable majority throughout his long years as its Tory leader. During his earlier  career writing brilliant articles packed with pungent phrases for leading periodicals (he needed the money), he had described it as ‘ the paradise of bores’, though in fairness he did not think that the Commons where he  had sat for fifteen years was much better.  Participation in the affairs of the upper house did not rouse any greater enthusiasm. ‘A Quaker jollification, a French horse-race, a  Presbyterian psalm, all are lively and exciting compared to an ordinary debate in the House of Lords’, he wrote unkindly, adding that little more could be expected from it than from ‘ a debate in one of Madame Tussaud’s showrooms.’

He deplored the House’s ‘scanty attendance and microscopic division-lists and perfunctory sittings.’ For far too many of its members, he complained, the Lords was merely ‘ a place for passing an idle hour or two before dinner.’ In 1891, he told Queen Victoria’s Private Secretary that ‘ the circumstance which most threatens [the Lords’] continued influence is the paucity and insignificance of its debates, an evil which is growing every year.. It is difficult to find men who can speak, and who will go into the House of Lords.’ He feared that the House would fall badly in public esteem if its real character and shortcomings should begin to attract wide attention.  Fortunately, in the late nineteenth century only extreme radicals scrutinised its work closely, searching for material in order to rail against it.

Salisbury did not  exaggerate in his criticisms of the Lords’ deficiencies. During his long period as leader the House usually met at 5pm and did not often sit later than 7pm (when it did, peers were expected to express regret for speaking ‘ at this late hour ’). There were one or two occasions in the early 1890s, recorded by Henry Lucy, when proceedings began at 4.15pm for private business which was dispatched in a few minutes, after which silence fell until 4.30pm when, in the absence of any public business, the House adjourned for the day.

‘ Absenteeism is the first great recognised blot of the Upper Chamber’, wrote George Curzon, a future Marquess and Lords leader , in 1888. No more than 15 to 20 per cent of members put in an appearance on average per session. Just 18 members spoke in debate in 1897.  The party whips thought they had done remarkably well if they persuaded as many of 40 peers in total to turn up for major legislation that was not unduly contentious. It was sometimes hard to ensure that even Tory Bills got through the House. What redeemed its reputation was the eloquence displayed in impassioned debates on controversial issues, like Irish Home Rule, when virtually all  its most talented speakers participated, and peers turned up in large numbers to vote . Salisbury’s daughter and authorised biographer, Lady Gwendolen Cecil, wrote: ‘ On field-days in the Lords … the galleries, the Bar, and the steps of the Throne, would be thronged with  Commons’ members taking refuge from the dreary loquacity of mediocrities or the interminable interludes of Parnellite [Irish] obstruction. The superiority of the Lords’ debates became a commonplace of newspaper criticism.’

Salisbury was clear that the answer to the Lords’  problems of torpor and poor attendance  was a change in its composition. In 1869, the year after his introduction, the former Liberal prime minister, Earl Russell, brought forward a Bill providing for the creation of life peerages, with an upper limit of 28 . Salisbury gave the measure vigorous support through all its stages;  it had an uncontested passage up until its final stage, third reading, when it was defeated. He said: ‘ We belong too much to one class, and the consequence is that with respect to a large number of questions we are all too much of one mind.’ Life peers from industrial, commercial and professional backgrounds  would provide the different attitudes that were needed—and, though he did not say so publicly, help redress the dismal attendance records of most hereditary peers. Why then limit the proposed life peers to so small a number, he was asked ? Salisbury replied that ‘ all change to be wholesome must be gradual.’ It would, in good Tory fashion, develop  further over time.

Gwendolen Cecil, who knew her father’s mind extremely well, insisted that ‘ he anticipated fundamental change’—in other words, ultimately a significant contingent of life peers alongside the hereditaries. ‘ The vital need for a strong and independent Second Chamber obscured all lesser issues in his eyes.’ Salisbury made another attempt to get the process of reform under way when he was prime minister: in 1888 he introduced a Bill to create 50 life peerages. Unexpected  opposition in the Commons from his own side put paid to it. He was forced to accept that ‘ life peerages are likely to be the creations of the imagination for some time to come.’ Gwendolen Cecil stressed, however, that ‘ his attitude towards it [reform] never changed.’

Seventy years would pass before a Tory government finally altered the composition of the Lords in the way Salisbury believed to be essential for its survival ; his grandson, the 5thMarquess, leader of the Lords  in 1957-8, overcame its continuing opponents among hereditary peers. No limit was placed on the number of life peers that could be created, as ‘ the great Lord Salisbury’ had proposed; if it had been, the Lords might today be considerably smaller than it is ,sparing it the  constant criticism it now attracts for being so bloated (though it was even larger in the past before all but 92 of the hereditaries were removed by Tony Blair). Since the start of Blair’s government in 1997, peerages have been created on an astonishing scale that is historically without precedent: 775 in under twenty-five years. ‘The great Lord Salisbury ’ would not have approved.