A flawed study of Parliament during the First World War 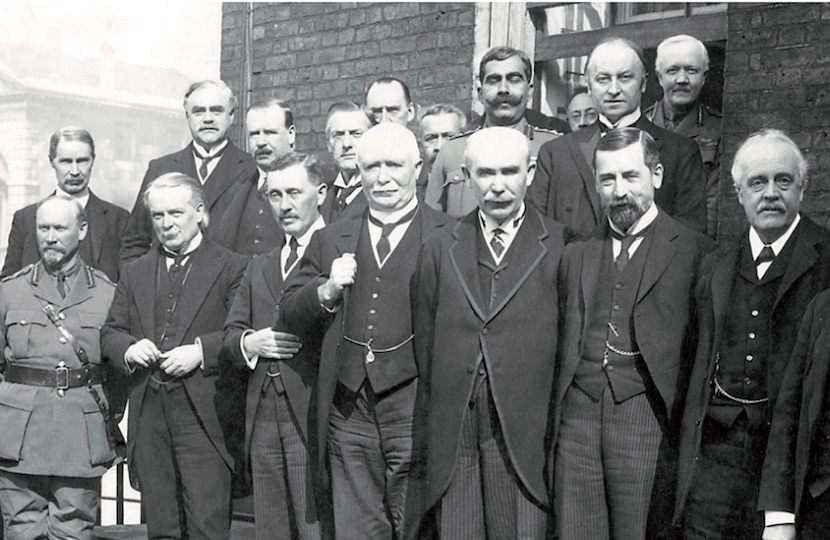 Nothing could be more welcome, as we commemorate the centenary of the First World War, than an account of what happened in Parliament during the period. Parliament itself has now published a short book, dealing with some aspects of events. The book has considerable merits, as Alistair Lexden pointed out in the following review, but it is seriously marred by omissions and factual mistakes.

Although this attractively produced short book of 84 pages was not commissioned by either House, readers will undoubtedly regard it as having the stamp of official parliamentary approval. There are forewords by the Speaker and Lord Speaker. The back cover indicates that the work has been published by the Houses of Parliament.

The project is obviously an admirable one, in conception. As commemoration of the centenary of the First World War continues, there is an overwhelming case for an account of Parliament’s role during the conflict. Surprisingly it has never been attempted before. This is surely the moment to fill a significant gap in historical understanding.

A great deal of detail would have been out of place in a publication designed to appeal to the general reader. The author, Chris Blanchett, hitherto unknown as a historian, provides short, sharp summaries of those aspects of Parliament’s wartime work that he has chosen, to try and indicate the part it played during the very different premierships of Asquith and, after 1916, Lloyd George.

The text is embellished by a wide range of striking illustrations drawn from portraits, photographs and cartoons in the contemporary press, though not all of them bear directly on Parliament’s activities: some depict scenes from the battlefront familiar from the extensive pictorial record of the hostilities.

There are unfortunately a number of problems with this publication. Blanchett’s laudable desire not to overburden the text with detail sometimes leads to undue brevity. The fierce controversy surrounding the introduction of military conscription by Asquith in 1916, discussed in the first chapter, is a case in point.

In its original form the Bill aroused such hostility in a secret session of the Commons that it had to be withdrawn. It was perhaps the most serious outbreak of discord in the House during the war. There is no mention of it here.

For his part Lloyd George often complained that the Commons, under the influence of the serving officers in it, tended to give uncritical backing to Haig and his commanders on the Western Front, undermining his efforts to curb their enthusiasm for long battles which cost so many lives without gaining much ground. Was there truth in this? It is a crucial issue, but Blanchett says nothing about it.

He also ignores a famous heated debate in May 1918 – perhaps the most important debate of the entire war – which many expected would cost Lloyd George his job. He was accused by the recently sacked director of military operations, Sir Frederick Maurice, of lying in the Commons about the strength of the British army in France. No prime minister has faced a more serious charge in wartime. Summoning up all his remarkable gifts of ingenuity, Lloyd George turned the tables brilliantly on his critics. As a result of the debate, the Liberal party was split permanently in two.

There is, on the other hand, much useful information in this volume about the transformation of the electoral system and the enfranchisement of women over thirty which stemmed from the first ever Speaker’s Conference in 1916-17. A great deal of parliamentary time was devoted to these far-reaching changes.

Apart from the excellent design, the best thing about this book is the summary it provides of the number of parliamentarians who served in the armed forces. Altogether 587 enlisted: 264 MPs and 323 peers. (We are also told that “there were many Lords who held a military rank but did not serve”.) The Commons sustained 22 deaths, the Lords 24.

Almost half the book consists of potted biographies of nine parliamentarians who enlisted plus one important non-combatant, Viscountess Rhondda. The individuals have been well selected, but sadly several of the biographical sketches are marred by factual mistakes and poor drafting. It is, for example, astonishing in a work of this kind, which should be absolutely authoritative, to find Henry Campbell-Bannerman, Asquith’s predecessor as Liberal leader, described as leader of the Liberal Unionists, the Tories’ most loyal allies, who had Joe Chamberlain at their head.

It is no less disconcerting to find Asquith appearing as Viscount Asquith after his elevation to the Lords; he was of course the Earl of Oxford and Asquith. The mistakes are to be corrected for a new edition which is now in preparation.