The first attempt to get elected Members into the Lords, a century ago 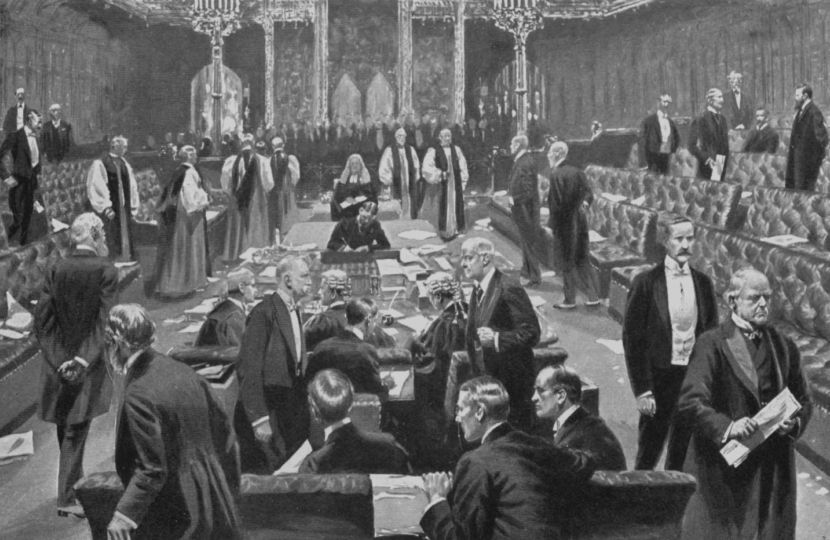 Those calling for an elected second chamber may be surprised to learn that a century has passed since the first government proposals were mooted. Alistair Lexden discussed them in a short article (attached), published in Parliament’s House Magazine on 16 May.

Which was the first government to try to reform the composition of the House of Lords by bringing in elected members?

The answer is the great Lloyd George coalition of Liberals and Unionists (as the Conservatives were then known) after the First World War.

Their joint manifesto for the December 1918 election stated that “it will be one of the objects of the Government to create a Second Chamber which will be based upon direct contact with the people.”

The implementation of that commitment required no great effort on the part of the Government. The work had already been done, in grinding detail, by the most impressive independent Committee ever to examine the role and composition of the Lords.

Chaired by the distinguished jurist and former Liberal cabinet minister, Viscount (James) Bryce, the Committee was adorned by most of the leading political talents of the day, plus the Archbishop of Canterbury.

After fifty meetings over six months, the Bryce Committee published its report in January 1918. It proposed 350 members for the remodelled Lords (which would have shrunk the existing House of 710 by half), with most being elected by members of the House of Commons; the remainder were to be selected by a Joint Standing Committee of both Houses, initially from among the existing hereditary peers and bishops.

The Bryce report gave  the Lords back its right of veto, lost in 1911, over all Bills, apart from money Bills. Disputes were to be settled through conferences of members of the two Houses.

After the 1918 election, Lloyd George told Lord Curzon, his leader in the Lords and a long-standing proponent of reform, to prepare a scheme based on the Bryce report. Progress was very slow. Enthusiasm for reform was not widespread.

Its strongest supporters were right-wing Unionists terrified by the prospect of Labour gaining power. One of them, Lord Selborne, predicted that unless the Lords was reformed and strengthened, a Labour government would declare a republic and abolish private property within two years.

Curzon was not assisted by such scaremongering . In the cabinet he was opposed by its two most brilliant members, Winston Churchill, then a Liberal, and the Unionist Lord Birkenhead. Both rejected any reform. Churchill, who never loved the Lords, stressed that he “was strongly in favour of doing nothing”, apart from providing for “ the exclusion of unworthy members.” Birkenhead, one of the most remarkable of all Lord Chancellors, who in the past had argued passionately for reform, suddenly decided that the existing House was the height of perfection.

Curzon finally concluded his uphill task in July 1922. His proposals, published in outline only, followed the Bryce report closely, apart from providing that 350 members would be elected “ either directly or indirectly from the outside” and include “ hereditary peers elected by their order.”

Three months later, in October 1922, Lloyd George was swept from power. Curzon’s work was lost. It was not widely mourned. His cabinet colleague, Lord Crawford, had noted in his diary in July that “ the reform plans would produce a crisis both inside the cabinet and in parliament.” He was relieved to find a widespread willingness “ to muddle on upon the present lines.”

In the century that was to follow no one would succeed where Curzon had failed, and the great Bryce report gathered dust.