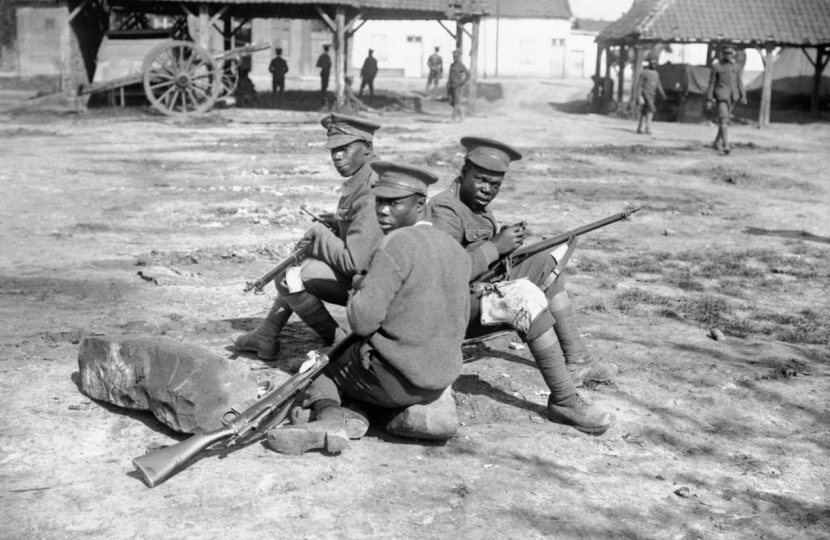 Alistair Lexden’s recent Lords debate on the contribution made by Empire and Commonwealth troops during the First World War( see below) led to him being commissioned by Parliament’s House Magazine to write an article for it so that his account of their indispensable role could be given a wider circulation.

His article was published in the House Magazine on 25 June.

Posterity often gives inadequate recognition to those whose assistance enabled Britain to overcome the severest difficulties in time of war. The British army’s feats of  arms are vividly recalled ; the valour of men from other countries who fought beside our soldiers rarely occupies a prominent position in the public memory.

A debate which I introduced in the Lords on 4 June produced widespread agreement across the House that the vital contribution of Empire and Commonwealth troops during the First  World War ought to be much better known. Without them Britain would not have emerged victorious . The part they played should be at the forefront of our minds in this final year of commemoration marking the centenary of that terrible conflict.

David Lloyd George, a brilliant prime minister who after 1916 provided the dynamic political leadership that Britain needed , declared that ‘ had they stayed at home the issue would have been different and the history of the world would have taken a different course.’

The early stages of the war in 1914 failed to bring the swift and decisive victory  that had been confidently anticipated. More fighting men were desperately needed. It was our great good fortune that help was available on the other side of the world. India had over 150,000 men under arms. A contingent was rushed to the Western Front to stem the crisis that had arisen there. In Lloyd George’s words, they ‘ helped to defend the water-logged trenches of Flanders through the miserable winter of 1914-15’ when efforts to get them suitable food had very limited success. In the close-run battles around Ypres in 1915, they helped to avert British disaster.

After 1915, the Middle East became the principal arena for Indian arms. The huge new imperial domain that Britain acquired from the Ottoman Empire owed more to the soldiers of India than to any others. The conquests of Mesopotamia and Palestine were achieved mainly by Indian units fighting alongside troops from many other places, from Belize to Fiji and Hong Kong.

Britain benefited hugely too from the remarkable, spontaneous enthusiasm exhibited at the recruiting offices of the Empire, which were deluged with volunteers. Within ten days, 8,000 men had set off from New Zealand. Within two months, 31,000 Canadians had been recruited, drilled and sent to Europe. They were the  vanguards of mighty dominion contingents, who were to make enormous sacrifices on the Western Front, following the earlier heroism of the Anzacs at Gallipoli. By 1918 they had come to be regarded as the best shock troops in the allied armies.

There was a tendency at the time to give  the white dominions undue prominence. Lloyd George provided a just assessment. He wrote: ‘ It is not too much to say that without the 1,400,000 fine men who rallied to the flag from the Dominions and the 1,300,000 who came to our aid from India, the Allies would not have been able to bear the strain of this gigantic struggle.’

The Lords debate called for much fuller recognition of the part played by African and Caribbean troops. As well as fighting in Africa itself and in the Middle East, they undertook back-breaking duties on the Western Front, digging trenches with impressive speed, maintaining roads and repairing railway lines. They were joined by 25,000 men from the South African Native Labour Corps. As Baroness Benjamin pointed out from the Lib Dem benches, ‘although at first they had to face racial abuse, they soon became admired for their courage, physical strength and tenacity.’

The Labour peer, Baroness Crawley, summed up the feeling that ran through the debate. ‘ These people’, she said, ‘ are part of our past and should be part of our future.’ Replying for the government, Lord Ashton of Hyde described the prominent position which has been given to Empire and Commonwealth troops in the government’s impressive centenary commemoration programme.

He spoke of ‘ a tremendous advance in understanding and interest’. I hope he is right in believing that it will be maintained after the centenary has passed. The Lords will be pressing the government on this point when we hold a further debate to mark the Armistice in November.