The Dreary Steeples Emerging Once Again 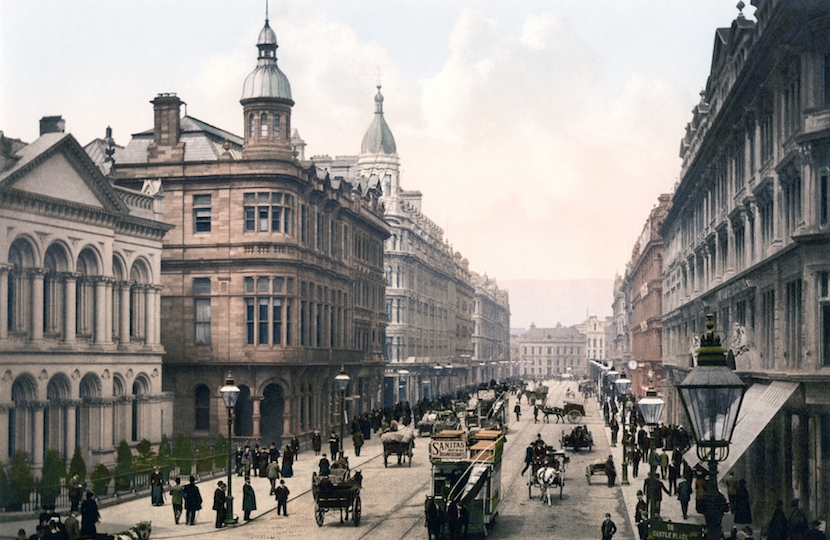 Gladstone famously declared that he had a mission to pacify Ireland. His botched home rule legislation of the 1880s and I890s led not to peace, but to greater strife. As this superb book shows, Winston Churchill succeeded where Gladstone and all his successors had failed. No other British politician has ever possessed so full an understanding of both the nationalist and unionist traditions, ‘the two Irelands’ in the phrase that came into widespread use in the late nineteenth century.

Churchill had direct responsibility for Irish affairs as a minister in Lloyd George’s coalition government in the early 1920s. He was the principal mastermind behind the settlement that Lloyd George reached with both Southern republican and Ulster Unionist leaders in 1921. The South got dominion status; six of Ulster’s nine counties got a devolved parliament. Churchill hoped that benign developments in the years to come might bring South and North together in some form of political unity under the Crown or at least within the Commonwealth. That was never remotely possible. They grew further apart, not closer together. Churchill did not seek to defy political reality. He made no attempt to enforce unity, though he pressed hard for it with some Ulster Unionist support to try and end Southern Irish neutrality during the Second World War, especially in 1940’s dark hours.

In suitably modified form, the 1921 settlement could have provided the basis for enduring stability in both parts of Ireland if grave mistakes had not been made from the 1970s onwards, principally by British politicians. They should have insisted that good political relations between North and South would only be possible if the Dublin Parliament abrogated the articles in its 1937 constitution that laid claim to the North. Instead Dublin was given a special role in Ulster’s affairs in 1985 long before the offensive articles were dropped, intensifying Ulster Unionist distrust of British and Irish governments and setting back the progress they sought to secure. Churchill would never have made such a cardinal blunder.

Unlike so many other British politicians, Churchill did not agonise over what should be done. He was not a prey to the foolish feeling that Britain had to atone for the supposed mistakes and misdeeds of the past on which Irish nationalists love to dwell. He did not succumb to the extraordinary illusion which has afflicted so many of his fellow countrymen that the Irish problem is so fiendishly complicated that no Englishman can understand it. He did what every statesman exercising power successfully has to do: he assessed the facts of the situation that confronted him in Ireland coolly and calmly, decided what should be done and implemented his decisions in a firm, yet flexible manner so that modifications in detail could be made if evolving circumstances warranted. He had few moral qualms, as his use of the undisciplined Black and Tans to terrorise the IRA in 1920-1 showed; Machiavelli was apparently the only political philosopher he ever studied. It was a fine preparation for his worldwide role in the wartime years ahead.

Irish affairs absorbed a good deal of his time throughout his career and he was entirely content that they should. That at once set him apart from all those Englishmen who have shrunk from involvement with Ireland, believing that it would be their political graveyard. He made his first public appearance at the age of three in Dublin where his grandfather, the Duke of Marlborough, was Disraeli’s Irish Lord Lieutenant at the head of the separate, devolved Irish administration. It was here that his father, the brilliant and unpredictable Lord Randolph, acquired his almost unique grasp of the nationalist and unionist dimensions of the Irish problem, which he transmitted to his adoring son.

During his complicated political career Winston Churchill seemed to lean first towards Unionism and then, after joining the Liberals in 1904, towards Nationalism. This made him deeply unpopular on both sides at different times, but he showed how well attuned he was to both when he became the first Liberal Cabinet minister to press for the exclusion of the Unionist heartlands of Ulster from Asquith’s Home Rule Bill which brought Ireland to the brink of civil war in 1914. Only through partition could peace be saved. ‘We shall’, he said, ‘make progress much better towards a settlement if we Liberals cultivate a habit of thinking about the genuine needs and legitimate apprehension of Ulster protestants’.

All this was but a preparation for his finest hours in Irish affairs in the 1920s. They inspire some of the finest chapters in this outstanding, sharply written book. Paul Bew extracts much revealing material from both published and unpublished sources to establish the ruthlessness and guile with which Churchill harried Michael Collins and his associates during their IRA terrorist campaign of 1919-21, forcing them to the negotiating table where he deprived them of the all-Ireland republic to which they were pledged and safeguarded Ulster’s position within the Union. Bew notes that the Black and Tans, the much loathed force instigated by Churchill, ‘were to prove formidable adversaries of the IRA by the simple expedient of borrowing their method of assassination with rather better weapons’. Churchill’s strategy ‘was to meet terror with counter-terror in a dirty war of reprisals’. The strategy, Bew adds, ‘though lacking in moral dignity was not faulty’.

Simultaneously, he covertly explored the prospects of a peace deal with the IRA through secret intermediaries. When formal negotiations took place in late 1921, he cheerfully bamboozled the republicans by assuring them that the newly established Northern Ireland would soon collapse as a result of boundary changes—and then proceeding to strengthen its Unionist government under its moderate first Prime Minister, Sir James Craig (of whom he greatly approved), by arranging handsome Treasury subsidies. Uninhibited by moral scruples, Churchill believed that any means were justified to settle the Irish problem on terms that provided realistic answers to the formidable challenges that Britain faced after the First World War with both North and South in turmoil (though for different reasons) and riven by hatreds that could ‘eat the live steel from a rifle butt’ in Kipling’s vivid phrase which Bew quotes.

Over seventy years later Tony Blair took much the same approach during his Northern Ireland peace process which Paul Bew, Professor of Irish Politics at Queen’s University, Belfast and a distinguished cross-bench peer, observed closely. He is acutely aware of the parallels. In the modern era, he writes, Churchill’s forked tongue ‘recalls nothing so much as the ambiguous language over IRA decommissioning employed by Tony Blair to secure the Good Friday Agreement. Churchill himself forgot about IRA decommissioning, which was a key British demand in late 1920’. Is deviousness an essential requirement for reaching peace in Ireland?

People often wonder whether after several hundred books there can be anything more to say about Churchill. Paul Bew alters our perception of the great man by showing for the first time that he ‘determined the shape of the relationship between and within the two islands more than any other British politician’. In doing this, he confirms his reputation as one of the foremost Irish historians of his generation.