Debate on the Economy 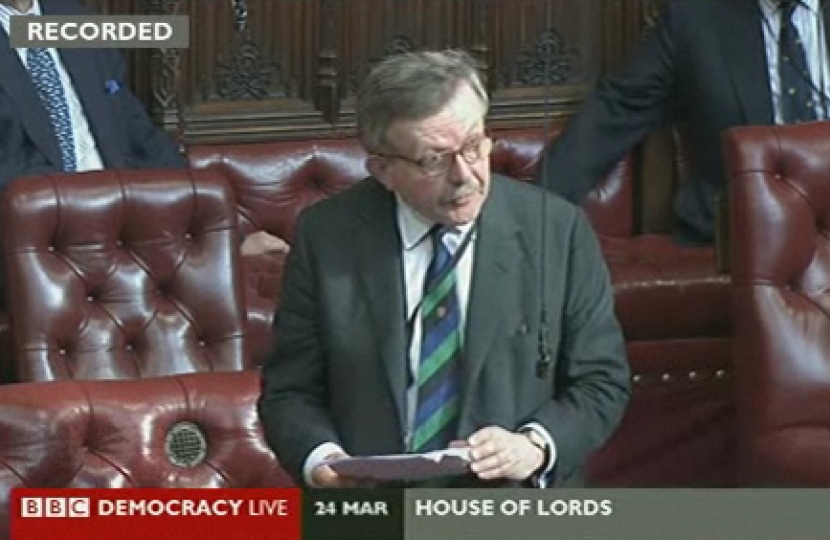 Text of a speech delivered by Lord Lexden in a debate 'to call attention to Government policies to promote enterprise, growth and the fundamental rebalancing of the economy'.

My Lords, the great national tasks of stimulating enterprise and growth, and of rebalancing our economy, to which this important motion refers, create profound challenges for us all.  Nowhere are these challenges more formidable than in Northern Ireland, in whose affairs I have taken a deep interest since the 1970s when I worked as political adviser to Airey Neave while he was Conservative Shadow Secretary for Northern Ireland.

Sadly, My Lords, the Belfast Agreement of 1998 has not had the effect of setting the Province on the road to sustained economic progress.  Nearly thirteen years on, it remains the poorest region in our country.  A higher percentage of its working age population is economically inactive than that of any other region.  Its economy today is strikingly unbalanced.  The private sector is small: the public sector is dominant.  Public spending has risen to the remarkable point where it is equivalent to more than two-thirds of GDP.  This state of affairs is sustained by taxpayers in Great Britain who provide the resources for roughly half of all government spending in Northern Ireland.

My Lords, the Province's grossly unbalanced economy is of course in part the result of the ravages of terrorism with which I, like many others, am personally so familiar.  I say this on the day that a memorial plaque is to be unveiled in another place to Ian Gow.  I went round many Northern Ireland businesses with him. How Ian cheered and heartened them with the marvellous neo-Churchillian language  which he loved to employ.  The spirit of enterprise, and the desire for private sector growth, have not vanished from the Province whose great private sector industries - shipbuilding, linen, rope-making and engineering - integrated its economy with Britain's in the nineteenth century.

As my right hon. friend the Secretary of State for Northern Ireland stressed in a speech in Washington last week, the Province remains an excellent place in which to do business.  It has first-class transport links to the rest of our country and to Europe; its education results are significantly better than those of other regions; and it is the first part of Europe to have 100 per cent broadband access.  It is against this encouraging background that the Northern Ireland Executive, uniting representatives of both communities, is fostering a strongly pro-business climate.

My Lords, in this new pro-business climate a number of forward-looking economists, accountants and businessmen based in Northern Ireland recently came together to form the Northern Ireland Economic Reform Group.  In a report last May the Group examined the Province's current unbalanced economy in depth.  It concluded that the key to rebalancing lay in a sharp reduction of Corporation Tax, enabling Northern Ireland to benefit in the way that the Republic of Ireland had done with its 12.5 per cent rate. On the basis of detailed calculations, the report predicted that 'Northern Ireland would benefit from a much larger private sector including 80-90,000 extra jobs over 20 years'.  The report also stated that 'a reduction in CT tax to a level close to that in the Republic of Ireland could quite quickly raise overall tax revenues in Northern Ireland' as new investment took place.

Now, My Lords, old-fashioned Tories like me imbued with the scepticism of Edmund Burke treat the bullish forecasts of professional economists with some caution.  Nevertheless, a case has surely been made out for a low rate of Corporation Tax in Northern Ireland that deserves full consideration, not least because of the competitive disadvantage created by the Republic of Ireland's current low rate . For some years that has been the firm view of my right hon. friend the Secretary of State for  Northern Ireland.

The joint manifesto published by my Party and the Ulster Unionists for last year's election contained a commitment to 'produce a government paper examining the mechanisms for changing the corporation tax rate in Northern Ireland in order to attract significant new investment'.  The commitment was incorporated in the coalition agreement and, following an announcement by the Chancellor in yesterday's Budget, a consultation paper, entitled Rebalancing the Northern Ireland Economy, was published this morning by the Treasury. It sets the scene for the full discussion of, in its words, 'the extent to which a phased reduction in the rate of corporation tax in Northern Ireland could support a rebalancing of the economy'. It is my profound hope that the discussion will have a positive outcome: so that the flame of enterprise which has survived the Province's long dark years can burn more brightly. Then Ulster's new-found peace would be matched by a new-found prosperity.