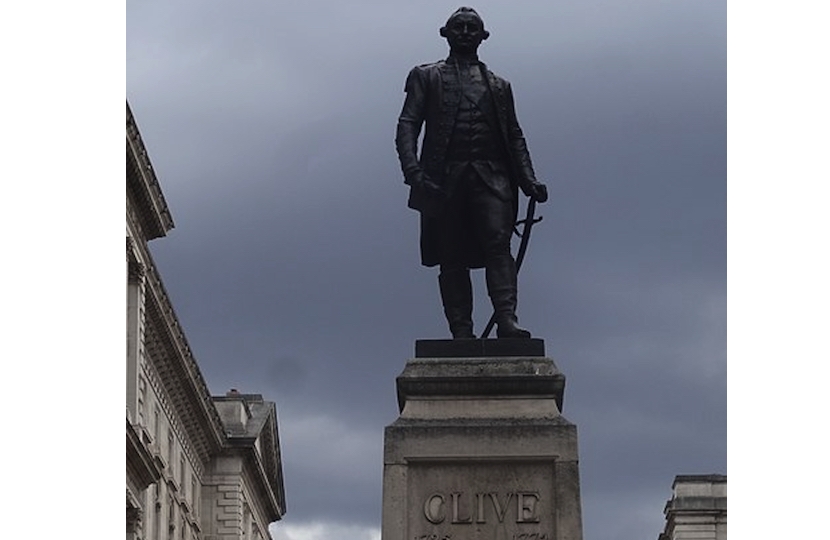 Robert Clive (1725-74) rose from obscurity in Shropshire to acquire fame and fortune in India. He was a most gifted military commander. At the Battle of Plassey in 1757, his 3,000 troops defeated an army of 50,000 to bring Bengal under British influence and open the way for Britain’s Indian Empire.

He is commemorated by a grade II listed statue by the side of the Foreign Office in London. The Government has recently been asked whether it will make plans for its removal. The Permanent Secretary at Foreign Office has said “it may have to go”. He is wrong, says Alistair Lexden.

In 1772 Clive, then an MP, underwent what was in effect a trial by the House of Commons in which every member had a free vote. Over two parliamentary sessions a select committee examined every aspect of his conduct in India. In defending himself, Clive won the admiration of the Elder Pitt who said he had never heard a better speech. It was not sufficient to save him from condemnation for accepting large sums from the ruler of Bengal, as demanded by the attorney-general in Lord North’s government. But later, in the words of the famous historian, Lord Macaulay, “long after the sun had risen over an animated debate, Wedderburne [the solicitor-general] moved that Lord Clive had at the same time rendered great and meritorious services to his country; and this motion was passed without a division.”

Who are we in this generation to seek to overturn the verdict of his contemporaries?