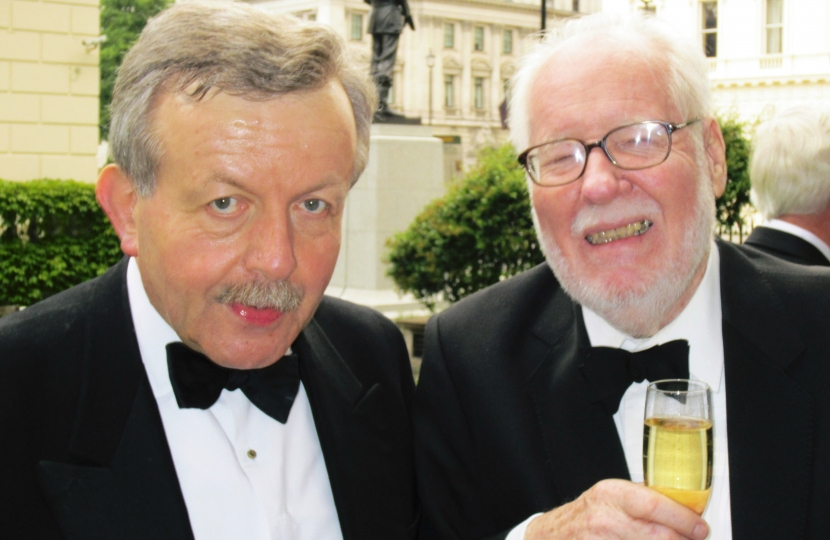 Alistair Lexden looks back on the career of an outstanding scholar. His tribute was drawn on by The Times, which published a long and full obituary on May 4.

Biographers normally extol their subjects. In his light, popular life of Gladstone, published in 1995, Roy Jenkins stressed the greatness of the Grand Old Man and his immeasurable contribution to human progress, which inspired liberal-minded reformers in the 20th century(like Jenkins himself).

Dick Shannon took a different view. His monumental biography, completed  a few years after Jenkins’s version,  presented Gladstone as a heroic figure, but with serious flaws as a politician and no strong commitment  to liberalism.

Drawing on a vast array of unpublished material, most of it unknown to Jenkins, he showed how Gladstone’s conviction that he was God’s chosen instrument, tortured by feelings of inadequacy for his task, led him into rash, ill-considered ventures, particularly in relation to Ireland.

His famous home rule bill, sprung suddenly on an unprepared Liberal party in 1886, was little more than a first, rough draft. Gladstone made no serious effort to avert the ensuing party split by improving it . His poorly contrived plan had divine sanction.

Shannon will be remembered chiefly for his epic work on Gladstone, published in two stout, attractively written volumes. The first appeared in 1982, and the second after a long gap in 1999. Jenkins had referred sniffily to “ some doubt whether the half-life will become a whole.” The completed whole was later condensed into one book, Gladstone: God and Politics (2007).

In an interview some years later, Shannon said that previous biographers had “ made Gladstone into what he wasn’t: a secular man…My big thing about Gladstone is that he was a religious nut-case. He really did believe that he and God were in consultation.”

A second important project contributed to the delay in completing the Gladstone biography. The doyen of Conservative Party historians, his friend (Lord) Robert Blake, asked him to contribute to the multi-volume history of the Party, published by Longman. The Age of Disraeli, 1868-1881: The Rise of Tory Democracy (1992) and The Age of Salisbury, 1881-1902: Empire and Unionism (1996), packed with new information, covered a key period in the Party’s evolution in unprecedented depth. No other historian has written with comparable authority about both the two main parties in the second half of the 19th century.

His ground-breaking work on Disraeli and Salisbury brought him no plaudits from the Conservative Party. He punctured its myths. He showed that far from being an exponent of “One Nation”, Dizzy “never moved away from his fundamental belief that government must be aristocratic.” As for Salisbury, he found himself with parliamentary majorities “which he never expected and did not particularly want.”

“The Shannons were a bog-Irish Catholic family”, he declared. After emigrating to New Zealand, however, they turned increasingly to Presbyterianism under the influence of the Scottish wives they acquired. Shannon himself was brought up as a loyal son of the Kirk, later shedding his faith as he studied Gladstone’s religious mania.

Richard Thomas Shannon was born in 1931, not in New Zealand but in Suva, Fiji, to which his father had retreated  from Auckland when, for a time, no one would employ him to build the boats and yachts through  which he made a living, in protest at his trouble-making as a left-wing trade union agitator. Refuge was provided by his father-in-law, a soap-boiler, who made good use of the islands’ plentiful supplies of coconut and other oils. It was a world captured brilliantly by Somerset Maugham in his short stories of the South Seas.

The exile in Fiji ended quite quickly, though without any diminution of the family’s radical ardour which the young Shannon readily absorbed, describing himself as a “progressive leftie.” At Auckland’s Mount Albert Grammar School, he emerged as  a “bright, bookish boy with no interest in Kiwi bloke culture”. A first in history at the University of Auckland in 1953  paved the way for a PhD which was later dropped, and the security of  a lectureship, but he yearned for European art and culture.

New Zealand was abandoned temporarily in 1957 for Cambridge where he first discovered Gladstone as a historical colossus, completing a doctorate on the Liberal leader’s  furious denunciations of the atrocities committed by “the unspeakable Turk” in the Balkans ,which was published to acclaim in 1963 as Gladstone and the Bulgarian Agitation 1876.

But after falling for Cambridge, and “especially its more disreputable aspects”, he found it impossible to settle once again into the academic round at Auckland. He was back in England within two years, teaching first at the University of East Anglia in Norwich and, after 1979,  at University College Swansea, part of the University of Wales, where he was Professor of Modern History and dean of the Faculty of Arts until his retirement in 1996.

He recaptured the joys of Cambridge in the late 1980s when he became a Visiting Fellow of  Peterhouse at the instigation of the controversial historian, Maurice Cowling, whose uncompromising Conservatism he now shared, having cast aside his family’s left-wing attachments in favour of Mrs Thatcher. He thoroughly approved of her trade union reforms, which would have filled his father with horror. Peterhouse’s ardently male world  at this time suited him well. He was a regular guest at its popular all-male dining club, known as the Adonians.

He passed his retirement contently in the Marylebone area of London, producing one final book wholly unlike anything he had written before, A Press Free and Responsible: Self-regulation and the Press Complaints Commission 1991-2001 (2001). It contained a forceful exposition of the case for press freedom, providing the essential arguments that the opponents of  press regulation would need in the years after the publication of the Leveson Report.

Looking back on his life, Dick Shannon confessed that “I rather enjoyed being seen as a maverick figure” and hoped to be remembered “as a jolly sort of man generally”.