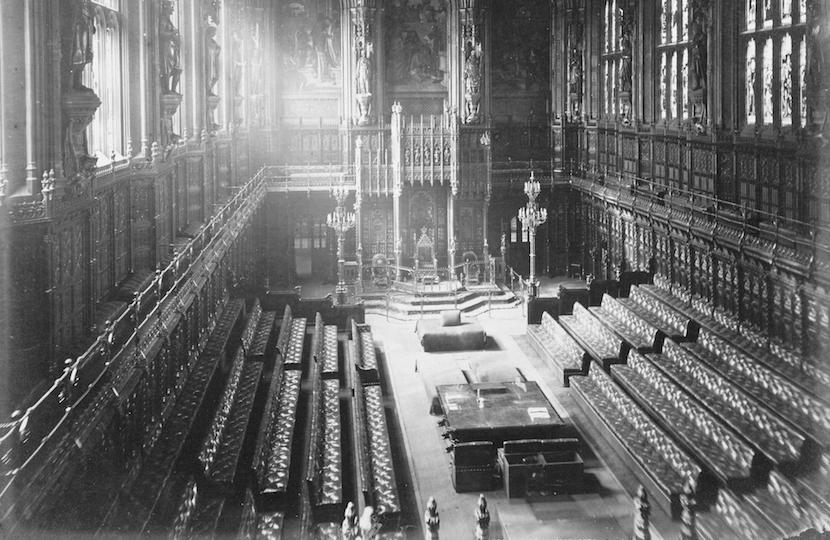 On 30 April 1958, Harold Macmillan’s Bill to create peers for life became law. Alistair Lexden marked the 60th anniversary of this major constitutional reform by publishing an account of the Bill, and what was said about it at the time, in Parliament’s House Magazine.

Queen Victoria was an early and strong supporter. Harold Macmillan referred to them as ‘the day boys’. Hugh Gaitskell feared they would be used to block a reforming Labour government and preserve the privilege of the House of Lords. Sixty years on from the Act which finally created Life Peers, historian Lord Lexden looks back at how Parliament’s Upper Chamber was transformed.

There were life peers in medieval England, some of them members of the royal family. Later, 18 mistresses of monarchs were given titles for life, some of them as duchesses. Unsurprisingly, these precedents did not impress the hereditary House of Lords when, on Palmerston’s recommendation, a life peerage with a seat in the upper house was conferred on a distinguished judge, Sir James Parke, in 1856.

His name was placed on the roll of members, and if he had taken his seat at once he might well have retained it, opening the way for others. But gout kept him away. In his absence the house overruled Queen Victoria, a strong supporter of life peerages, declaring that the new life peer’s letters patent and writ of summons did not entitle him to sit in parliament.

The decision outraged Walter Bagehot, the famous author of The English Constitution, published in 1867. “The House of Lords,” he wrote, “rejected the inestimable, the unprecedented opportunity of being tacitly reformed. Such a chance does not come twice.”

But it did, a full ninety years later. As Tory ministers observed wryly when they took up the issue after their return to power in 1951, no one could accuse them of acting with undue haste.

On 5 December 1957, the Macmillan government’s one-clause Life Peerages Bill, consisting of some 230 words, was given an unopposed second reading in the Lords where it began its passage, to the surprise of some constitutional experts who felt that legislation of such significance should be taken in the Commons first.

Strong words of opposition came from a few vociferous critics on the red benches. Lord Elton, casting himself in the role of Cassandra, invited the house to share his sadness in “looking almost our last on the oldest parliamentary assembly in the world”. Thirty peers voted to exclude women; Lord Hailsham, ever blunt, called them “idiotic”.  Most peers accepted the case for admitting life members (Harold Macmillan referred to them privately as “the day boys”), despite concern about the unwillingness of the government to make

clear how many would be created. There was much muttering about swamping. “We certainly do not want to add to the number of aged people in the house,” declared Lord Woolton, the respected wartime food minister, speaking “as one of them” and destined to be disappointed.

No one put the case for the appointment of young and energetic peers for life more forcibly than the fifth Marquess of Salisbury, the principal champion of far-reaching Lords reform on the Tory benches (following in a family tradition) who had resigned a few months earlier as leader of the house.

Salisbury envisaged a dramatic cut in the existing 860 hereditaries. He proposed that 200 chosen by a select committee after each general election should join the new life peers in a reconstituted house where all would be paid for their diligent work. Some of his former cabinet colleagues were attracted by such a radical approach. It could, over time, make Labour the largest party in the Lords, the Lord Chancellor Lord Kilmuir suggested at the end of the Lords two-day second reading debate.

Then, as now, there was great concern about the size of the house, which was larger than any other in the world; China’s national people’s congress had yet to overtake it. Lord Attlee stressed the need “to correct the excessive numbers”. Obviously, if the hereditary element remained unchanged, the problem could only get worse.

But in 1957-8, as at other times, radical reform was in the end set aside for lack of sufficient cross-party support. The one point on which wide agreement existed was that the Lords needed more active members, including women, to get its work done effectively.

Average daily attendance was around 100. Labour could count on the active support of no more than 15 peers, with just four doing most of the work, “all elderly men who may not be with us for long”, as a friendly Earl noted sadly. Life peerages were the solution to the most urgent problem which the house faced.

The Labour party opposed the bill in both houses, despite the prospect of much-needed new blood. When the bill moved to the Commons in February 1958, Hugh Gaitskell launched a fierce attack. “The main motive behind these proposals,” he said, “is to preserve and enhance the prestige of the House of Lords” so that it could use its powers more intensively to defeat Labour legislation in the future.  He put forward no alternative; it was “an open question” whether Britain needed a second chamber at all, he added.

Nevertheless, Labour were quick to claim their share of the new life peers. On 1 July 1958, Harold Macmillan noted in his diary: “I saw Gaitskell. After all the socialist protestations regarding life peers – they will never touch it etc, etc – he had produced five or six nominations!” Six were included in the first list of 14, published on 24 July, along with the same number of Tories. Four of the total were women. All were people of the utmost respectability apart from the best known, Bob Boothby, whose long- term affair with Macmillan’s wife did not stop him indulging his taste for rent boys.

So began one of the most important evolutionary changes in British constitutional history; 1,419 life peers have been appointed over the last 60 years, bringing new members into the Lords at a rate never previously seen. The parties of the left have been greatly strengthened. The arrival of crossbench experts on a wide variety of subjects has enriched the house immeasurably. Women are prominent in all parts of it. The house today is rightly troubled about its size, as it was in 1958, but this time agreement has been reached about what should be done.