Who was Bonar Law? 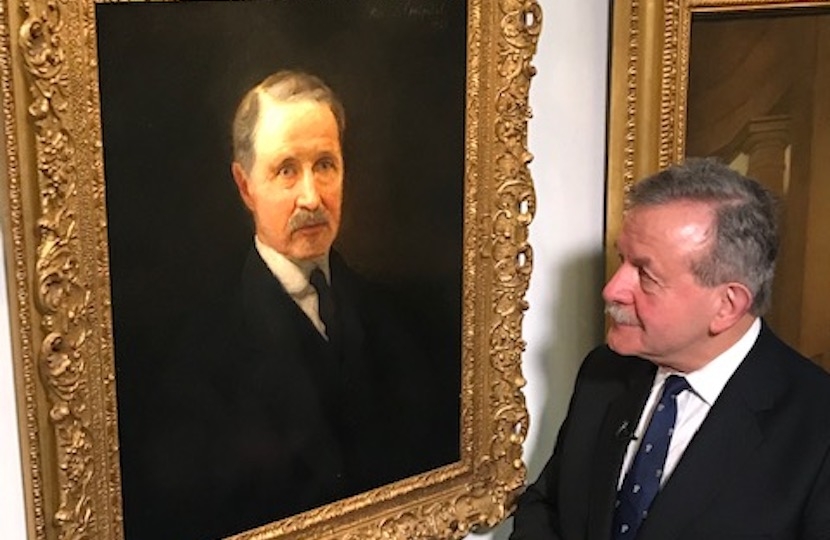 Asquith, the Liberal Party leader, is said to have described Bonar Law (1858-1923), in much quoted words, as “the unknown Prime Minister”. Alistair Lexden, historian of the Conservative Party, took a close look at his career in preparation for a short film which will be shown  on the BBC’s Parliament Channel. Much of the film was made at the Carlton Club in London, which has a fine portrait of Bonar Law by the little-known artist, René d’Hôpital. The picture above shows the Conservative historian with the portrait.

The overview of Bonar Law’s career and achievements which follows was produced to assist the programme-makers in writing the script for it, which the Conservative historian narrates in the film. Information about when it will be shown will be posted in due course.

MP for various seats (beginning and ending in Glasgow),1900-23; Junior office at the Board of Trade, 1902-06 (when the Tories suffered a crushing election defeat); leader of the Conservative Party (known at this time as the Unionist Party), November 1911- March 1921, and again October 1922- May 1923; Colonial Secretary in war-time coalition under Asquith, 1915-16; Chancellor of the Exchequer, 1916-19, and Lord Privy Seal, 1919-21 (Leader of the House of Commons throughout) in coalition with Lloyd George (and de facto Deputy Prime Minister) ; resigned because of ill-health, 1921, but returned to oust Lloyd George at the famous Carlton Club meeting, October 1922; Prime Minister, October 1922 to May 1923.

Key Aspects of His Life

* The only prime minister born outside the UK (apart from Boris Johnson); the only one closely connected by birth with a country of the Empire (Canada); and the only one of Ulster Unionist extraction (Empire and Ulster were his two biggest political preoccupations).

* First businessman (Glasgow iron merchant until 1900, making and inheriting a substantial amount, but not a millionaire) to become Tory leader—and followed by two more businessmen , Baldwin and Chamberlain, with reversion to landed elite thereafter.

* Totally uninterested in the countryside (unable, embarrassingly for a Tory leader with many rural MPs, to identify a pheasant), and absorbed in urban life (first Glasgow, then London).

* Without intellectual interests; recreations chess (a leading amateur player), bridge, golf, tennis and popular novels (though he claimed to have read Gibbon’s Decline and Fall of the Roman Empire three times before the age of 21).

* Blessed with an extraordinarily powerful memory, enabling him to make all his Commons speeches without notes from the moment of his arrival at Westminster (having practised assiduously in the Glasgow Parliamentary Debating Association over many years as he trained himself for a political career); he could also quote from memory passages of his opponents’ speeches made years earlier, to their discomfort.

* Always a passionately committed Tory, unlike his predecessor, Balfour, who did not care for his Party much; revived the spirit and morale of the Party after the rather lacklustre Balfour years, which had brought parliamentary disarray over Lloyd George’s ‘People’s Budget’ and the 1911 Parliament Act, which curbed the power of the Lords, a Tory bastion; and put Conservative Central Office and the wider Party organisation on a modernised basis, fit for the 20th century.

* Ended Tory divisions over tariff reform, which involved a return to economic protection and imperial preference, by insisting on total loyalty to the policy and making it impossible for supporters of free trade to remain in the Party; this paved the way for the reintroduction of tariffs in the inter-war period.

* Brought the Party political battle to fever-pitch, and delighted his own Party, through his fierce campaign against Asquith’s Irish Home Rule Bill, 1912-14, while privately preparing the ground for compromise by working for the exclusion of part of Ulster from a devolved Irish parliament in Dublin; Northern Ireland, created a century ago this year is his achievement.

* Declined King George V’s offer of the premiership in December 1916 after failing to persuade Asquith to join him and Lloyd George in a new coalition, and agreed to serve under Lloyd George instead; with Liberals split, the Tories became the predominant party in the coalition.

* As Chancellor introduced war loans and war bonds, described as “among the greatest achievements in the history of British finance”; his budgets were widely praised.

* Fought two elections as leader, 1918 and 1922; won both; could have governed alone after the first, but remained in coalition with Lloyd George, whose dynamism he admired; victory in the second, with an overall majority of 75, set the scene for  Tory political ascendancy in the inter-war period under Baldwin, his protégé, and later Chamberlain who first entered government under him in 1922.

* His premiership of 209 days was the shortest of the 20th century, and the third shortest in modern history, after Canning and Goderich in 1827 and 1827-8 respectively; it was dominated by wrangling over repayments of war debts.

* “He lived simply, smoked excessively, and shunned society. He rarely left London and made no use of Chequers”, in the words of the Oxford Dictionary of Quotations.

Established Tory grandees, drawn overwhelmingly from the landed classes, had something of a shock when Bonar Law became leader of the Party in November 1911, as the following extract from the memoirs of Arthur Lee, later Lord Lee of Fareham (who gave Chequers to the nation), shows.

“During the ensuing weeks [at the end of 1911] I derived a good deal of cynical entertainment from the embarrassed efforts of the blue-blooded Tories, who had so largely engineered Balfour’s downfall, to adjust and reconcile themselves to the externals of their new Leader from the suburbs of Glasgow. After the aristocratic elegance and courtly bearing of A.J.B., Bonar’s commonplace and commercial appearance, his apparently ready-made clothing and almost aggressive lack of distinction, made them feel vaguely uncomfortable, like a man who is conscious that he has married beneath him.

One memorable evening, before the opening of the new session, Bonar, as Leader, gave the usual official dinner to the Unionist Front Bench, and the venue, instead of 4 Carlton Gardens, was his incredibly dreary house, Pembroke Lodge, in the backwoods of West Kensington. No one, not even the chauffeurs or cab-drivers, seemed to know just how to get there, and as 8 o’clock approached I found four or five of my colleagues in a similar predicament, circling round the neighbouring streets and vainly appealing to passers-by to guide them to their goal. The dinner was worthy of its setting. It was brought in—slightly congealed—from a neighbouring caterer’s and the whole atmosphere of the occasion was more that of a wake than a Tory festival. The faces of some of my more aristocratic colleagues, and their faint disgust with the food and the Derry and Tom’s furnishings, were a sheer delight to my soul and I was simply fascinated by the only ‘objet d’art’ to be seen in the whole house—a cast-iron bust on the sideboard of Robert Burns, with the ridge from the join of the mould vertically bisecting the forehead and nose.”