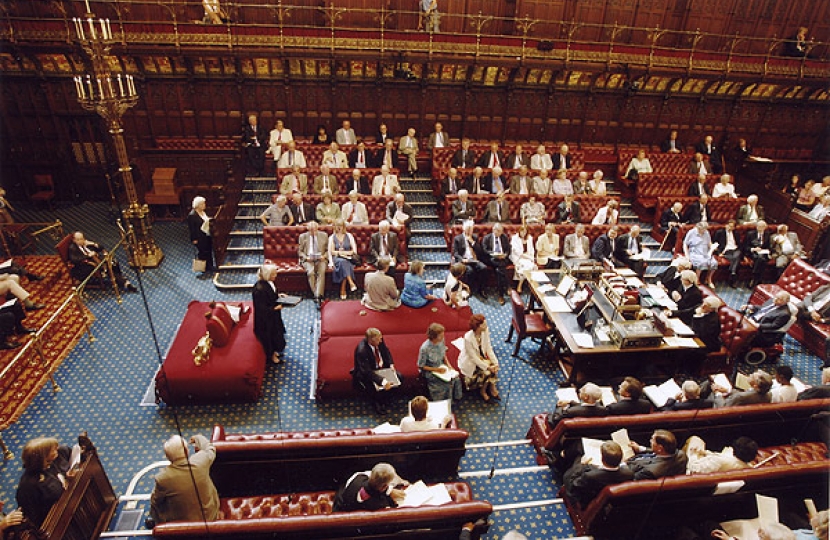 My Lords, my brief contribution to this evening's important debate might perhaps be regarded as having a slightly maidenly tinge. I have spoken once before since having the privilege of joining this noble House, but these are the first words since then that I have uttered in this Chamber, which Disraeli had chiefly in mind when he compared this House to the Elysian fields-that paradise in which heroes of the ancient world reposed for all eternity. Disraeli was firmly opposed to the creation of a mass electorate, convinced that the right to vote should be tightly restricted. However, above all, this great hero of the Tories believed that his party should seek to master whatever sets of circumstances might be created by the remorseless process of change to which, as he often pointed out, this progressive country is always subject.

I do not think it can be said that my party has so far done spectacularly well in dealing with the circumstances created by the enfranchisement of certain British citizens living permanently abroad, and nor perhaps have other parties. The most striking feature of the current overseas voting arrangements is how few people have so far taken advantage of them. Of those living overseas who are eligible to take part in our elections, no more than some 31,000 are actually registered today, as my noble friend Lord Astor pointed out. That is exactly the same number as 20 years ago after the Representation of the People Act 1989 had extended to 20 years-up from the initial five-the period during which our fellow citizens abroad can apply to vote in UK parliamentary and European elections. I was greatly struck by the comment of my noble friend Lord Lester of Herne Hill about the lack of any rationale for these different periods. As he has told us, no rationale has ever been offered and it would be very useful to have one because, as other noble Lords have pointed out, it is of serious concern that so few British citizens living abroad have come forward to take up the right to vote here, which was conferred on them in the 1980s.

As far as my party is concerned, this state of affairs does not reflect indifference on the part of our fellow citizens living abroad. There are lively and successful Conservative associations in many overseas countries-some of which I have had the pleasure of visiting-and they form part of a network which is advised and assisted by the highly regarded Conservatives Abroad office in Tory headquarters. As one of our leading overseas members has recently said, "Within their host countries, expatriates meet and celebrate their Britishness in all types of organisations, associations, churches and schools".

When the Conservative Party's flourishing overseas associations are asked why so few people are actually registered to vote-I think this is true of other parties-they tend to answer with one accord that the process of registration is too complex and cumbersome. There are other factors, but registration is so often the dominant one. The statutory requirements for registration are not easy to fulfil, as the noble Viscount, Lord Astor, explained in his opening speech. Again, as my noble friend Lord Astor pointed out, the time needed to fulfil the requirements makes it virtually impossible to register close to an election. The position would be greatly eased if electronic registration were introduced. Of course, there would be many problems attached to this, not least fraud, but many other countries have overcome them successfully. There might perhaps be merit in asking the Electoral Commission to examine the issues thoroughly and produce a full report which could help to inform close discussion of the ways in which more of our fellow citizens abroad could exercise more easily the important right that they have been given.

Against such a background it might also be timely to reconsider the current rules which disenfranchise all our fellow citizens who have lived overseas for more than 15 years. Subject to the views of the noble Viscount, Lord Astor, to whom we are greatly indebted for this debate, I ask the Minister to consider these suggestions.