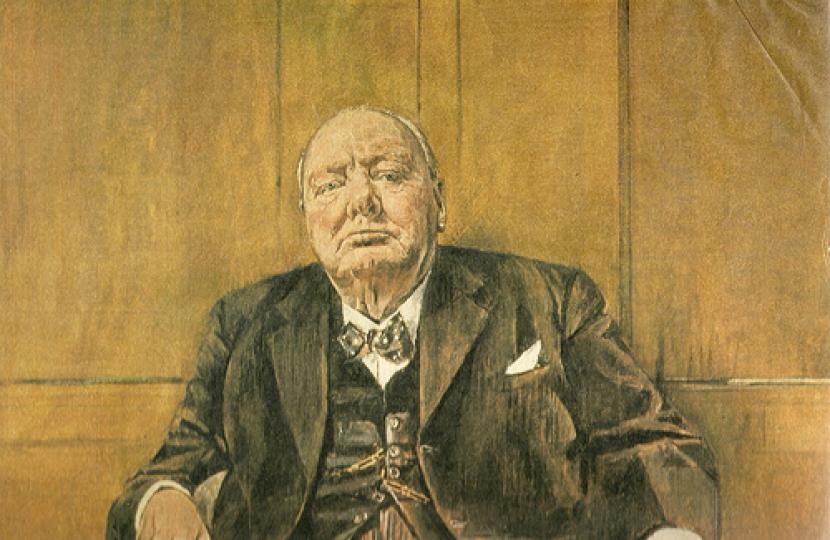 In June 2016 (see previous article), Alistair Lexden published an article about Graham Sutherland’s acclaimed, but deeply controversial portrait of Winston Churchill. Presented to him on his eightieth birthday, 30 November 1954, the picture was later destroyed on his wife’s instructions. (A copy was later made and given to the Carlton Club, but it is not on display.)

A programme about the portrait and its destruction is being made for broadcast on Sky Arts; it is expected to be shown towards the end of the year. On 11 May Alistair Lexden was interviewed at some length in Westminster Hall where the portrait was presented in front of a large group of MPs, peers and distinguished guests. He described the ceremony itself, which concluded with a well-known speech of thanks from Churchill. He devoted just two terse sentences to this “remarkable example of modern art”; a finely produced volume, containing the names of the parliamentarians who had contributed to the cost which was also presented to him, received lavish praise. No one was in any doubt about his dislike of the portrait.

Alistair Lexden also explained how Sutherland came to be commissioned by an all-party committee of MPs in July 1954 and how work  progressed with Sutherland and Churchill establishing a friendship which was shattered when Churchill saw a photograph of the portrait a few days before it  was due to be presented. He tried to get the presentation cancelled. His hatred of the picture became all-consuming. Lady Churchill’s secretary and her brother burned it at the latter’s house near Chartwell in 1955 or 1956.