Sir Henry Wilson: the MP the IRA assassinated - and the Commons forgot 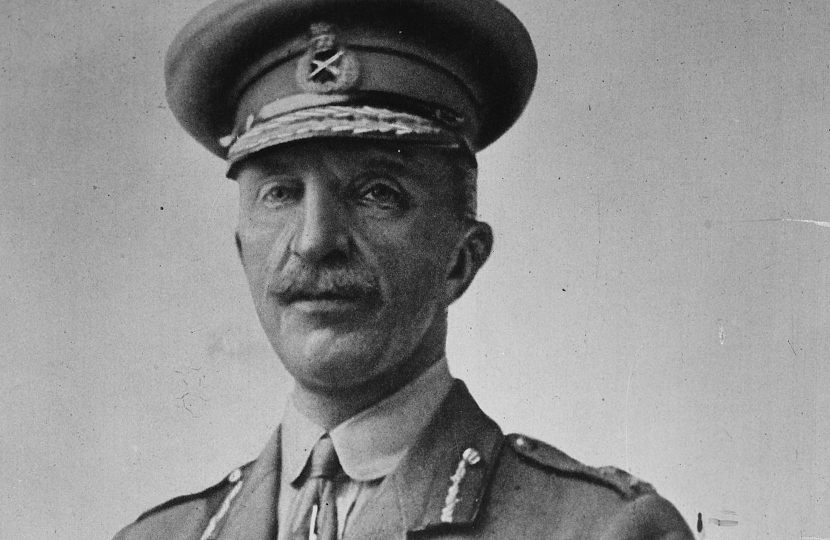 There are memorial shields in the House of Commons commemorating MPs who have been killed in action or by terrorists. One is missing. A campaign has been launched to secure a shield for Sir Henry Wilson on the centenary of his death in 2022. This article was written in support of the campaign.

A railway  journey from London to Lexden on the edge of Colchester in Essex begins at Liverpool Street station (named after the Tory leader who was our third longest-serving prime minister between 1812 and 1827). Until the reconstruction of the station some thirty years ago, I bought my tickets home in a vast booking hall dominated by a marble war memorial covered with the names of over 1,200 Great Eastern Railway staff who had died in the First World War. The booking hall has gone, but the magnificent memorial remains.

There is a stone tablet beneath the memorial which bears the following inscription: ‘To the memory of Field Marshal Sir Henry Wilson Bart GCB DSO MP, whose death occurred on Thursday 22nd June 1922, within two hours of his unveiling the adjoining memorial.’ The Field Marshal’s head and shoulders are depicted in bronze on a plaque attached to the tablet.

Until the ticket office  moved to a new location in the 1990s, I often cast a respectful glance at this highly controversial soldier turned politician (the only Field Marshal elected to the Commons in modern times), who had been returned unopposed as Ulster Unionist MP for North Down at a by-election just four months before his death at the age of 58.

On the Tory benches, where all Ulster Unionists sat until 1974, he had immediately become prominent among a group of vehemently right-wing MPs, some 50 strong, known as the Diehards. Some had  started to speak of this witty, charming, formidable man with a silver tongue as the group’s future leader, who would enhance its chances of influencing the course of Tory policy towards the strengthening of imperial ties and higher defence spending. These hopes were dashed on 22 June 1922.

After the unveiling ceremony at Liverpool Street, which took place shortly after 1pm on that June day nearly a century ago, Wilson, who was in uniform, went by underground (where trains then had first-class compartments) to Charing Cross. From there, a taxi took him first to his club, the Travellers in Pall Mall, where he briefly checked the tapes for the latest news (a common practice at that time), and then on to his home at 36 Eaton Place in Belgravia, where he arrived at about 2.20pm.

As he approached his front door, he was shot by two young Irish republican terrorists in their twenties, converts to the cause after serving in the British forces during the First World War. They used revolvers which they had bought a week earlier. As the bullets struck him, Wilson drew his sword in a valiant, but vain, gesture of defiance.

It does not seem to have occurred to anyone that this very distinguished person ought to have had some form of armed protection. But even if it had been offered, Wilson was the kind of man, brave to the point of fearlessness, who would have turned it down out of hand (like Airey Neave, the next MP to be killed by Irish terrorists 57 years later).

He was an obvious terrorist target. In 1919, the IRA had begun a brutal campaign to try to achieve complete Irish independence. They had no more uncompromising or outspoken opponent than Sir Henry, who was then Chief of the Imperial General Staff (CIGS), the army’s professional head, and principal military adviser to Lloyd George’s coalition government, which was dominated by Tories.

This implacable foe of the IRA had deep roots in Ireland. He came from an old and large Ulster family, who had sold their very successful Belfast shipping business in the mid-nineteenth century and bought estates in three southern counties, Westmeath, Longford and Dublin (an extremely unwise investment as it turned out). None of them passed to Sir Henry, born in 1864 and the second of four sons, who set his sights on an army career after leaving Marlborough College in Wiltshire.

His English public school left his strong Irish accent intact. He remained close to his family in Co. Longford, ‘good employers of Catholic and Protestant workers alike’ (in the words of a top IRA officer), who became deeply committed to the Unionist cause when Parnell’s campaign for Irish Home Rule became a serious threat in the 1880s. Sir Henry always referred to himself as an Irishman, who also took great pride in being British. There was, he said, ‘only one solution to the Irish question, and that was the Union.’ His Irish wife took exactly the same view. They had no children.

In 1919, Wilson was confident that the British government could defeat the IRA, and save the Union, if it implemented his plans to transfer the overall responsibility for crushing terrorism from the police to the army. ‘Unity of control was essential’, he said. This never happened. The army acted as requested in support of the police, which increased its numbers by recruiting ex-servicemen, the notorious Black and Tans, whose arbitrary reprisals against terrorists and their suspected sympathisers horrified Wilson. He was appalled by this ‘desperate and hopeless expedient [which was] bound to fail’. He was of course right.

After that failure, Lloyd George negotiated a treaty with some of the Irish republican leaders in December 1921. Only the six counties of what had become Northern Ireland remained outside the self-governing Irish Free State, which subsequently turned itself into a republic. Wilson, never one to mince his words in private or in public, denounced Lloyd George’s Irish settlement as a ‘shameful and cowardly surrender’.

He never spoke to the Welsh wizard again, resigning as CIGS in February 1922 to enter politics, where one of his chief aims was to bring down Lloyd George. Enmity replaced the devotion that had until then united the two men. Wilson was the only senior First World War general to win Lloyd George’s admiration and friendship.

Praise was lavished on him at 10 Downing Street  as a  superb military organiser and administrator with a greater grasp of key strategical issues than anyone else. In 1919, Wilson, then 55, had become the youngest Field Marshal in British history, apart from Wellington.

A common love of gossip and intrigue cemented the relationship between the prime minister and the soldier until their Irish quarrel destroyed it. Lloyd George’s mistress, Frances Stevenson, bitterly regretted the rupture. She called Wilson  ‘a great and loveable man’ in her diary on the day of his murder.

That verdict was far from being unanimously endorsed. Wilson was loathed by some of his British contemporaries as heartily as he was adored by others.

Irish republican hatred of him intensified during his four months as an Ulster Unionist MP. At the request of the new Northern Ireland government, he drew up plans for a Special Constabulary in the Province. The IRA denounced him as the instigator of a Protestant militia formed to carry out ‘pogroms’ against Catholics . In fact, he emphasised that ‘encouragement should be given to Catholics to join equally.’ He told Northern Ireland ministers in Belfast that, ‘it was essential to secure the confidence of all law-abiding people in the ability of the Government to govern.’

False IRA propaganda was widely believed. Was it spread to try and justify an organised terrorist plot to murder him? The two young assassins believed the republican propaganda, but there was no plot. Peter Hart, a historian who has examined all the evidence in detail, concluded that ‘we must accept the assertions of the murderers that they acted alone, in the (grossly mistaken) belief that Wilson was responsible for Catholic deaths in Belfast.’ The two men were arrested, tried, sentenced to death, and hanged at Wandsworth prison on 10 August 1922.

Sir Henry Wilson was the first MP to be murdered in London since the prime minister, Spencer Perceval, 110 years earlier. He was the second MP to be killed by Irish terrorists, almost exactly 40 years after the first victim, Lord Frederick Cavendish, Gladstone’s nephew by marriage, in Phoenix Park, Dublin.

In his final words at Liverpool Street station on 22 June 1922, Sir Henry gave thanks for the memorial to ‘men who died doing their duty’. He added:  ‘In doing what they thought right, they paid the penalty.’ It was his own epitaph.

This article also appeared on ConservativeHome