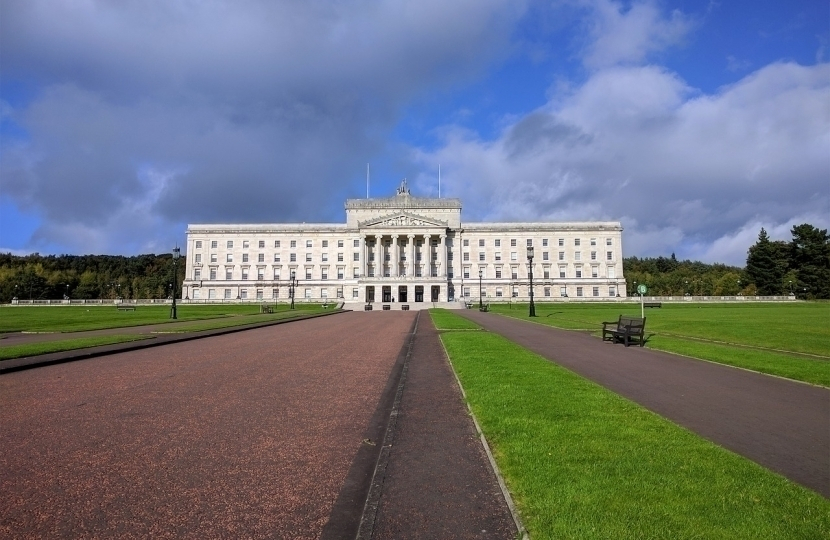 On 7 April, Alistair Lexden introduced a short debate about Northern Ireland in the House of Lords.

The text of his speech follows. It was altered slightly in the course of delivery.

The affairs of Northern Ireland should be the subject of frequent  discussion in both Houses of Parliament. Yet the sad reality is that over much of the century that has elapsed since the establishment of Northern Ireland with its own devolved institutions, Parliament has absolved itself from its obligation to think about how it can contribute to Northern Ireland’s  welfare, except at times of crisis.

The problem is summed up in a phrase that my noble friend Lord Empey often uses: ‘Devolve and forget’. The error is easily made. Constant vigilance is needed to avoid it.

It is most unlikely that excited voices will ever be heard on the streets of Belfast, saying: ‘The House of Lords is discussing Northern Ireland today’. But our fellow countrymen and women are entitled to expect that their Parliament will be watching carefully over their interests, brimming with goodwill towards all who look for peace and stability in their community.

There is a particular inducement to seek a debate on Northern Ireland at this time . It is the knowledge that my  noble friend Lord Caine will replying to it on behalf of  the Government. My noble friend  immersed himself in the affairs of Northern Ireland some 35 years ago, and, marvellous to say, shows no sign of wanting to withdraw from his immersion. He is the very embodiment of the strong Union, which is at the heart of this debate.

My noble friend  and his fellow Ministers need vigorous and steadfast support from their officials as they implement the commitment to strengthen the Union, given in the Conservative manifesto at the last election. There have been times when the Northern Ireland Office has seemed more interested in promoting good relations with the Irish government than in working to make the Union stronger.

Is the energy of the Northern Ireland Office now firmly directed towards strengthening the Union?

My Lords, the hope of seeing the creation of a stronger Union between Northern Ireland and Great Britain—to serve the interests of Unionists and non-Unionists alike more effectively—has been one of the themes of my life since I first started to think about Anglo-Irish relations as a whole, and Ulster’s place in them, as an undergraduate in Cambridge long ago.

This hope was reinforced by working for Airey Neave in his last years before his murder. The 43rd  anniversary of his death occurred last week on 30 March. No one has ever been punished for this crime. Its perpetrator is said to be running a bar in Mallorca, adorned with tatty republican memorials.

Airey Neave wanted a stronger Union in order to secure a clearer recognition throughout our country—our United Kingdom—that a terrorist threat to one integral part of it must be firmly suppressed. He thought it unarguable that  a state must defeat a terrorist attempt to force change upon it, wherever within its territory such an attempt is made.

What happens in Northern Ireland, particularly if it imperils the Union, ought, he strongly believed, to be high on the political agenda throughout our country. I wonder if ,even after all these years, that is a lesson which has been  learnt.

But are supporters of the Union really entitled to feel sure they are right when they say that it is the only constitutional framework in which  peace and stability can be secured? Not so, comes at once the retort from so many of those who are not Unionists, and they are of course substantial in number.

Throughout my lifetime, the belief that the substantial minority would inevitably  become a majority has been rife in all parts of the United Kingdom . Firm predictions of the constitutional change that was bound to follow have made since the 1960s.

They can be found in official Whitehall files, and in the private papers of British politicians of all parties.  It came to be widely agreed that the life expectancy of the Union was bound to be short. What was the point of working to secure its future when its dissolution was steadily approaching ?

This deep-seated assumption rested on nothing more substantial than a high Catholic birth rate. But Catholics are by no means instinctive republicans, dedicated to the proposition that the Union must be overthrown.

Today, as a result of the Belfast Agreement, an Irish identity can be given proper expression within Northern Ireland. Attitudes have become more complex. The 2011 census showed that no more than some 25 per cent of those from a Catholic background felt themselves to be exclusively Irish.

This surely is a point of considerable significance. It indicates that there are many people beyond the ranks of avowed Unionists who will accept the Union—and in doing so strengthen it—if they can see that the balance of  practical advantage is in its favour.

There is a great deal that the Government can do to make the practical balance of advantage more fully understood. Take the long list of economic and social commitments which the Government gave in the New Decade, New Approach document in January 2020.

The noble lord  Lord Coaker drew attention to their importance in a recent debate. They demonstrate in the most vivid way the practical benefits of the Union, and need to be effectively explained by Ministers in speeches in Northern Ireland.

The central preoccupation at the moment is, of course, the future of the Northern Ireland Assembly and Executive. Will they be restored to full working order after the elections next month? The Government, I think, is under no illusion that,  if that is to happen,  the acute difficulties caused by the Northern Ireland Protocol must be removed.

But there are other difficulties. Nearly 25 years on, there must be a case for reviewing the Belfast Agreement to prevent it weakening the Union, which will happen if problems are allowed to fester. Senator George Mitchell himself, the central figure in the long negotiations which produced the Agreement, believes that a review should be conducted.

To Airey Neave, what mattered in the political sphere in Northern Ireland was the effective provision of the great public services: education, health, housing, social services. All are jeopardised if devolution falters. Stormont is Northern Ireland’s upper tier of local government, as well as its devolved legislature.

‘We stand for a proud, confident and modern unionism that affords equal respect to all traditions and parts of the community.’ These admirable sentiments appear in the 2019 Conservative manifesto. The object of this debate is to find out what is being done to put them into effect.

When I first met Airey Neave, he had on his desk a booklet entitled Do You Sincerely Want to Win ? One of the names on the cover was that of Peter Lilley, now my noble friend Lord Lilley. The question remains relevant today. Do we sincerely want to win a secure and lasting peace for our fellow countrymen and women in Ulster? It needs to be built on the foundation of a strong Union.