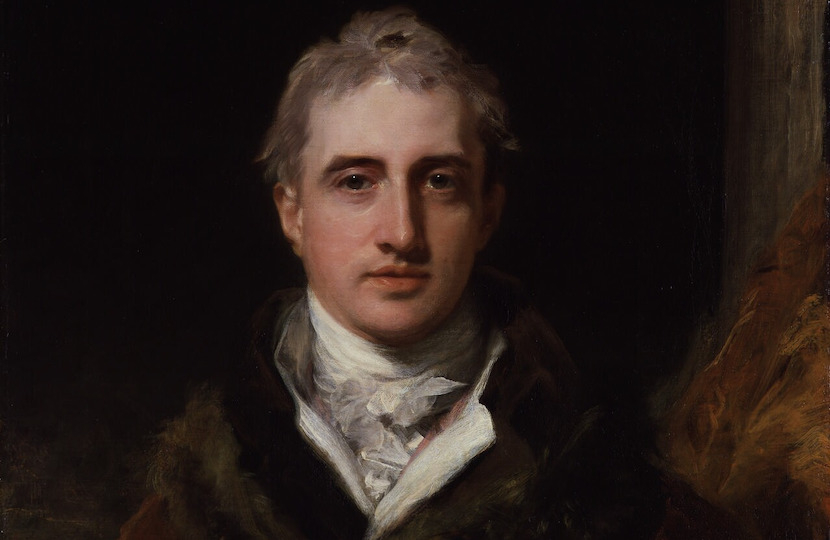 In 2020, the Government  announced in a major Northern Ireland policy document entitled New Decade, New Approach that a Castlereagh Foundation would be established in the Province. In a Lords debate on 22 June, Alistair Lexden asked for details about it.

Reading the New Decade, New Approach document, my ageing Unionist and historian’s eyes alighted on a reference in paragraph 25 on page 49, to the establishment of a Castlereagh Foundation. How very satisfactory, I thought, that an institution is to be set up bearing this famous name.

Viscount Castlereagh, later the second Marquess of Londonderry, was the Younger Pitt’s right-hand man in bringing about the Act of Union of 1801. After his death in distressing circumstances exactly two hundred years ago, his coffin was placed next to Pitt’s in Westminster Abbey. He is the subject of a  brilliant biography by Professor John Bew, a man not unconnected with our own dear noble Lord, Lord Bew.

Pitt and Castlereagh united Great Britain and Ireland under the Westminster Parliament, but they were prevented from accomplishing their full ambitions. Alongside the Act of Union, they wanted to establish  equality of citizenship between Catholics and Protestants throughout the newly created United Kingdom, through what is known in the history books as Catholic Emancipation. King George 111 stopped them.

The course of subsequent history might have been different if Catholics had had their sense of injustice addressed in 1801, as the two great architects of the Act of Union had intended.

I am, for these reasons, naturally keen to know more about the proposed Castlereagh Foundation. The New Decade, New Approach document is not very forthcoming. It states only that the Government will provide the necessary funding to establish the Foundation which will “support academic research through universities and other partners to explore identity and shifting patterns of social identity in Northern Ireland.”

What will this mean in practice? How will the Government take forward this very significant initiative, which is designed to promote and  assist academic research into issues of great importance?

At the Congress of Vienna in 1815, Castlereagh, who became one of our greatest Foreign Secretaries, said: “It is not our business to collect trophies, but to try if we can to bring the world to peaceful habits.”

I hope the Foundation which will bear his name will help to strengthen peaceful habits in Northern Ireland, with which his  Unionist family was through many generations closely identified.

Those devoted to peaceful habits have reason today to reflect once again on the suffering which occurs when the IRA assaults them. On 22 June 1922, IRA terrorists murdered the  Unionist  MP for North Down, Field Marshal Sir Henry Wilson, on the doorstep of his London home.

They claimed quite falsely that Sir Henry wanted to oppress the Catholic minority in Ulster. This great man believed in equal treatment for all law-abiding people. His career would perhaps be a suitable subject for study by the Castlereagh Foundation.

In his reply, the Lords Northern Ireland Minister did not go much beyond the information provided in 2020, but undertook to make the Government’s intentions clear shortly.