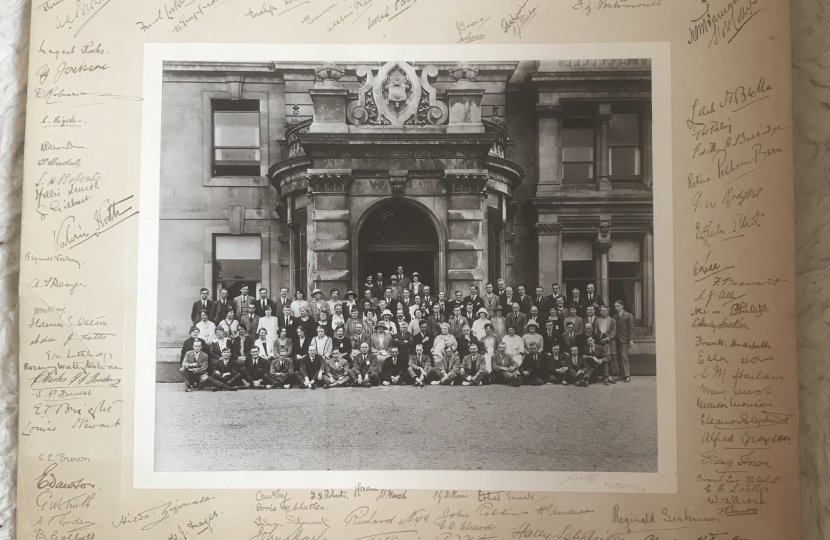 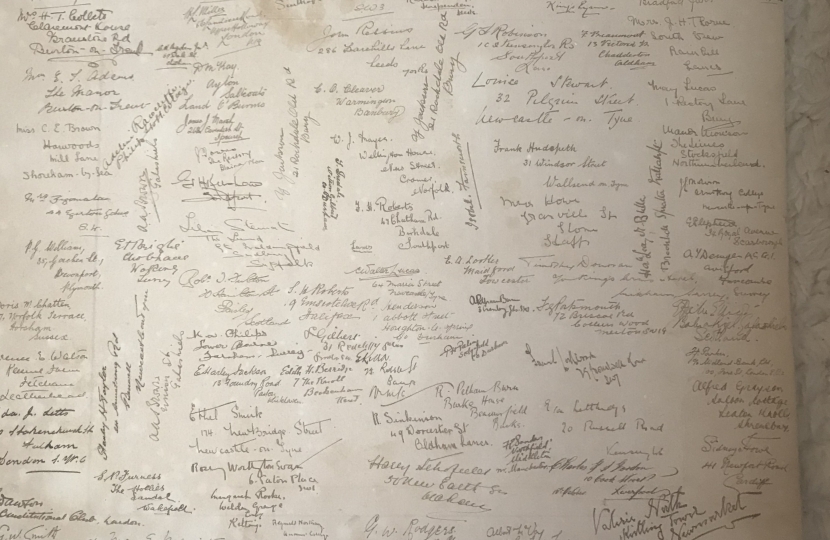 Research prompted by a mysterious photograph sent to Alistair Lexden led him to the first College set up by the Conservative Party in the 1920s to provide its members with education courses, as the following article explains.

I recently received an email to which was attached an image of a photograph, dating from the inter-war period, which had been taken outside the entrance to an unidentified stately pile of no obvious architectural distinction. It was sent to me in my capacity as historian of the Primrose League. Did I think the group in the photograph was composed of its members? It seemed extremely unlikely. After the First World War, the League declined rapidly in numbers and importance, as I pointed out in my short history of it, published ten years ago. Its meetings, while fewer in number, remained the colourful occasions for which the League was famous. Its members loved to wear the regalia by which they set great store: sashes, stars, badges, pins of many types. Its habitations (as its local branches were known) proudly displayed their banners for the cameras: often rather lovely objects woven from silk. The group in the photograph looked altogether too staid and serious for the League.

At first, I was far from convinced that this was a photograph of a political gathering. The names and addresses which smother the front and back of the picture include no leading political figure of the time, or even an obscure backbench MP. It seemed that this might have been a group drawn from any social, business or professional organisation—Christian missionaries to imperial outposts, architects, sanitary engineers, for instance—for a residential conference in comfortable, if not luxurious, surroundings, though in few walks of life would women have been so well represented at that time as they are in this group.

Before finally deciding that identification was not going to be possible, I took a last look at some of the addresses on the back of the picture. Enlarging the image brought the Constitutional Club into view. It was one of eleven large official London Tory Clubs, one rung down from the Carlton, established in the nineteenth century. Then I noticed an address with a very familiar name above it: Reginald Northam of Queens’ College, Cambridge, where he had been President of the Union in 1923, becoming an economics lecturer after graduation (a prize at Queens’ awarded in his name commemorates his devotion to his college) .

Later, as Sir Reginald Northam, he was notable figure in an important section of the Party brought into existence after the First World War, with the strong backing of the leadership, to equip members and party agents with the information and arguments they needed to make the case for Conservatism on public platforms and in private conversations, and answer the attacks of its opponents. The Conservative Political Education Movement sometimes appears with capital letters in the party literature of the period to underline its importance. No one supported it more vigorously than Stanley Baldwin, the Party’s popular and successful leader for most of the inter-war period. His leading biographer, Professor Philip Williamson, has made clear that ‘Baldwin impressed upon the various Conservative Party organisations…the need for party workers to school themselves in economics and civics. He also encouraged the Party’s training facilities.’

Baldwin had no more diligent standard-bearer than Reginald Northam. He was later to make a great mark as Principal of Swinton Conservative College in Yorkshire from its foundation in 1948 until his death in 1967. My mentor, T.E.(Peter) Utley, a formidable Tory writer and speaker, left a vivid account of a lecture that Northam often gave, entitled ‘The Tory Faith’. It began with ‘a brief review of the history of the Tory party, pointing out that sometimes it had supported authority and sometimes freedom, but bringing out the essential theme of consistency in all these policies—i.e that it had invariably been right. Then, he would suddenly descend from the clouds and convey some eternal and homely piece of Tory truth. He would say that when he was a lad he had to black his father’s boots every morning and that, if the job were not done properly, his father would beat him. After that, there was not a single dry eye or silent hand in the hall. The perennial essence of Toryism had been displayed.’ His devotion to the cause was reflected in the title of the one book he published: Conservatism, the only way (1939). Any group with Northam in it would have been involved in some way with Conservative political education; the one in the photograph might well have been treated to an early version of his rousing, frequently delivered lecture.

The picture which recorded this gathering of Tories in search of knowledge clearly belonged in the Conservative Party Archive at the Bodleian Library in Oxford. Its owner, Alison Debenham, who had got in touch with me, readily agreed that the Party Archive was the right place for the photograph, which had been in the possession of her late father, Peter Moyse ARPS, of Helpston, Stamford, Lincolnshire( though it is entirely unclear how he, not a supporter of the Conservative Party, had acquired it).

When I sent the electronic image on to the Party Archivist at the Bodleian, Anabel Farrell, she immediately spotted something I had missed: two of the people in the picture had given the Philip Stott College as their address. Here was the vital clue. Though almost entirely forgotten today, the College, named after the wealthy businessman who provided it, was the first Tory institution in which lecture courses and policy discussions were held under the aegis of the party’s political education movement. It operated for just six years between 1923 and 1929. Two of its lecturers had signed the picture. Anabel was able to identify the building  where it was taken. ‘It is almost certainly Overstone Hall in Northamptonshire, where the Philip Stott College was based. We can be pretty certain that the group consists of attendees at one of the Philip Stott residential courses.’

The mysterious photograph, taken by a firm in Kettering in Northamptonshire during the 1920s , had been firmly identified, thanks to Anabel. What could be discovered about the work of the College and the man who put up the money for it?

Though in its early days Baldwin brought it to public attention by delivering two major, much-quoted  speeches at it, the Stott College was not a success, which explains why it was so short-lived. Professor Stuart Ball sets out the difficulties in his encyclopaedic Portrait of a Party: The Conservative Party in Britain 1918-1945, published in 2013. He writes: ‘The Stott College opened in April 1923 with a series of fortnightly courses running through to September. However, few wage-earners could afford to attend for such a long period, whilst the cost of subsidizing more than the occasional student was possible only for the wealthier constituencies’.

The  explicit aim of its founder, Sir Philip Stott (1858-1937), an architect and surveyor who had amassed a fortune through shrewd investment in the Lancashire cotton industry(for which he  designed 77 mills), and had been created a baronet in 1920, was to provide political education and training for working-class Tories active in trade unions. For years a leading Tory in Oldham, then a two-member marginal working -class constituency which he contested unsuccessfully at the January 1910 election(ten years after Churchill’s Tory victory in the seat), he believed passionately that the Party must become a powerful force within the trade union movement and adopt working-class candidates in winnable seats. He was a prominent member of the Labour Committee of the Party’s National Union set up in 1919 to defeat socialism in the workplace  and advance working-class Toryism.

One of those in the photograph who has been identified was certainly from a working-class background: Frank Hudspeth, son of a miner, who became one of the most famous professional footballers of his day playing for Newcastle United, which he captained between 1923 and 1926. He was a significant recruit to the party of One Nation, the famous phrase which Baldwin had coined in 1924 (now widely and incorrectly attributed to Disraeli.)

But Stott’s dream of a more socially diverse Party in the Commons failed (only one authentically working-class Tory MP was elected during the inter-war years), and its failure was reflected in the abandonment of his College’s original aim to be a training-ground for working-class Tory talent. In Stuart Ball’s words: ‘ The problem of recruiting sufficient students resulted in the introduction of shorter courses and the widening of access to all sections of the party, and attendance rose to 1,186 in 1927. However, the college was too small to be effective as the educational centre for the party as a whole’.

Baldwin’s close friend and reforming Party Chairman, J.C.C. Davidson, put the point  a little more delicately in his memoirs, writing that the College had ‘ not proved entirely satisfactory’.  He had his own ambitious plans. He took great pride in raising £200, 000 from wealthy businessmen (the most generous of them was rewarded with a peerage) with which he bought the historic Ashridge estate in Hertfordshire for the Party’s use in 1928.  It superseded  Sir Philip Stott’s little loved institution the following year when Baldwin opened the Bonar Law Memorial College, which ran an impressive range of courses at Ashridge until the outbreak of war in 1939. (Its history by Clarisse Berthezene was published in 2015.) After 1945 Reginald Northam’s Swinton College became the third and last Tory educational establishment, closing in 1977.

Sir Philip was incensed when the pioneering College he had given to the Party closed its doors. It seems that, with the thoughtlessness that is so often characteristic of the Party’s upper ranks, no one had bothered to consult him about the transfer of its educational and training courses to the much larger and more conveniently situated premises at Ashridge. He believed his College could have been a success if the Party had worked harder to achieve it.

When he died in 1937, his obituaries noted the Party had shown little gratitude for the College which had absorbed a significant part of his fortune (much of the rest went on restoring the derelict Cotswolds village of Stanton where he set himself up as a country gentleman in its 16th century manor house). In his last years he became a thorn in the side of the Party leadership, backing Churchill (Oldham’s former MP) vigorously in his unsuccessful campaign to stop Baldwin giving internal self-government to India, a campaign which produced a bitter Party split. He resigned from the Party in 1935.

Sir Philip’s College survives today only in the photograph that was sent to me and in some other pictures: postcards were produced for its students to send home (examples can be found on e-bay). Overstone Hall, which he bought in 1920 to house it, was just as unlucky as the Conservative Party’s first College itself. Detested by the first and last Lord Overstone, one of the nineteenth century’s leading bankers, who had it built in 1866, it never became a family home. Some of its 114 rooms were used by the girls’ boarding school, to whom Sir Philip sold the building in 1929. The New Testament Church of God acquired it in the 1970s, but divine protection did not follow; half of it burnt down in 2001. A plan by Barry Howard, the building firm and its current owner, to turn it into 52 apartments has been blocked by the local council. A prominent group in the local community rejoiced that it would remain ‘a living ruin’.