The Empire shrine that never was 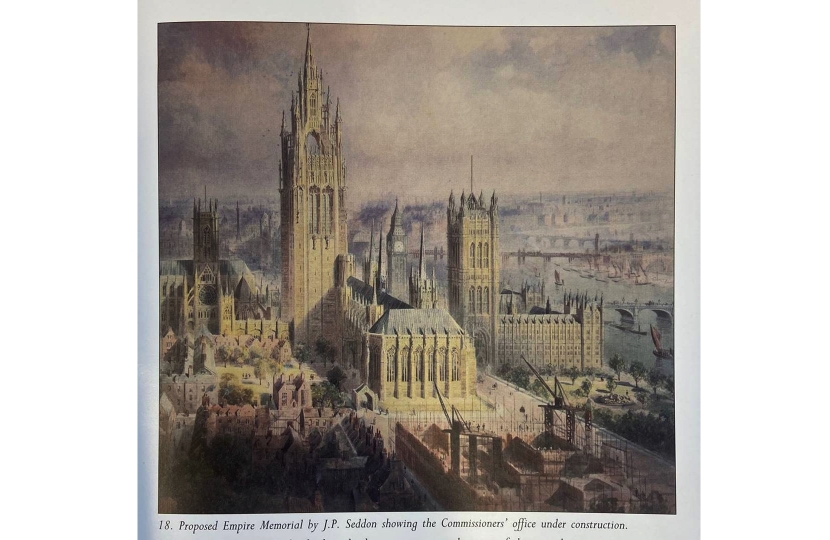 Britain’s pride in its expanding Empire in the nineteenth century led unsurprisingly to calls for the erection of grand and imposing memorials to it in the imperial capital, London.

A number of architects responded, though rather spasmodically. In 1834, Sydney Smirke, the architect who designed the original Carlton Club building in Pall Mall, proposed that the Empire should be celebrated  by building a smaller version of Salisbury Cathedral  beside the Serpentine Lake in Hyde Park. Later ideas included another ambitious scheme for Hyde Park: a vast pyramid with a crypt for royal burials beneath it.

The great Empire shrine, pictured here, was proposed for the heart of Westminster, between the Abbey and the Houses of Parliament, at the beginning of the 20th century. The architectural historian, Professor G. Alex Bremner, has described it as “among the grandest and most visionary proposals London had ever seen, and, next to Giles Gilbert Scott’s Anglican cathedral at Liverpool, one of the last expressions of Gothic revival architecture in Britain.”

The plans for the shrine were devised jointly by two well-established architects, John Pollard Seddon (1827-1906) and a much younger colleague, Edward Beckitt Lamb (1857-1932). Seddon was a prolific ecclesiastical architect whose many commissions included the restoration and extension of Llandaff Cathedral and the University College of Wales at Aberystwyth. Lamb, who also specialised in ecclesiastical work, brought to the joint enterprise talents developed  in the late Victorian Arts and Crafts movement.

Their plans drew upon and amplified various earlier designs produced by a number of leading architects, including George Gilbert Scott himself. The work of these forerunners had been considered by a Royal Commission on “the present want of space for monuments in Westminster Abbey” in 1891. It failed to produce clear recommendations, but agreed that the Abbey was not large enough to accommodate all those who deserved to be buried or commemorated there in future. The Empire could be expected to supply many candidates.

Seddon and Lamb provided the answer to that  problem. Their Imperial Monumental Halls and Tower would have had ample space for the bones of the heroes of Empire and monuments to them -- and much else besides. Their design, they declared, was “for a structure to contain monuments of high art to eminent men and women of all parts of the British Empire…The whole group of buildings would form a worthy centre to the metropolis of the Empire ‘upon which the sun never sets’, and in historic and religious interest could not be rivalled.” (Their inclusion of the women of Empire shows the architects were far from being a couple of imperial reactionaries.)

The Tower would have soared above its neighbours, Westminster Abbey and the Palace of Westminster. At 167 metres—548 feet—it would have dwarfed both Victoria Tower and Big Ben. Monuments and imperial trophies would have adorned its lower floors. Archives would have been housed at the top.

The timing was impeccable. The grandiose plans were exhibited at the Royal Academy in March 1904 when imperial fervour was at an intense pitch two years after the end of the Boer War and of the coronation of Edward VII, a monarch who strongly encouraged splendour and display, and delighted in imperial ceremonial.

The great shrine was not universally applauded by arbiters of design. The Builder magazine said sniffily that there was “ a little too much of ‘ megalomania’  about it”, exhibited most clearly in its height towering above the Houses of Parliament.

Seddon and Lamb readily accepted that their design’s “grandeur of scale” would involve “costly execution”. The price was estimated at £800,000 (over a billion today). Yet with total government spending in 1900 standing at £144 million, the Empire shrine was clearly affordable.

What proved fatal to its prospects was a lack of enthusiasm among politicians. Tories had associated themselves closely with the cause of Empire since Disraeli’s day, and, in the decade that saw the launch of Joe Chamberlain’s campaign for tariff reform, designed to draw all parts of the Empire more closely together, strong support for the shrine might have been expected amongst the Tory leaders who were then in government.

They remained silent. The prolonged disturbance and upheaval that building work would have caused on their doorstep must have contributed to their indifference. Really ardent imperialists could have endured that. Most of the Tory leaders did not match that description. The Empire with its cross-class appeal provided a most useful element in Tory election campaigns, but at Westminster it stirred comparatively little interest (debates on India were notoriously badly attended) unless some aspect of it came temporarily to the forefront of party political conflict, as in the case of the Boer War or tariff reform. For the most part politicians fought each other at Westminster in this period not over the Empire, but over Irish Home Rule and the constitution. They were not greatly moved by Britain’s dominion over palm and pine. The Empire shrine remained unbuilt.

Seddon and Lamb’s unrealised work was not entirely forgotten. It led others to dream of raising monuments to the glory of Empire in Westminster. After the First World War, a Committee was established with an array of distinguished members who included the Archbishop of Westminster, Elgar and Lord Leverhulme. They wanted to turn the area between Westminster Abbey and the Tate Gallery into a great imperial centre with university buildings, a vast war memorial and much else besides ranged along an imposing Empire Avenue.

But this too came to nothing after a Commons debate in 1925 when the government was asked whether opponents of the scheme were “anti-nationalist, or German or something anti-English.” Yet they won the argument. Even in the heyday of Empire, it proved impossible to arouse sufficient enthusiasm to bring the great projects proposed for Westminster into being.

ACKNOWLEDGEMENTS – For much of the information in this article, I am indebted to G. Alex Bremner, “ ‘Imperial Halls and Tower’: Westminster Abbey and the Commemoration of Empire, 1854-1904”, in Architectural History (the journal of the Society of Architectural Historians of Great Britain), Vol.47 (2004), pp 251-82 and Steven Hicks, Around 1 Millbank: A History of the Area (1998) in which the picture of the shrine is published.