In defence of Stanley Baldwin - and of complementary medicine 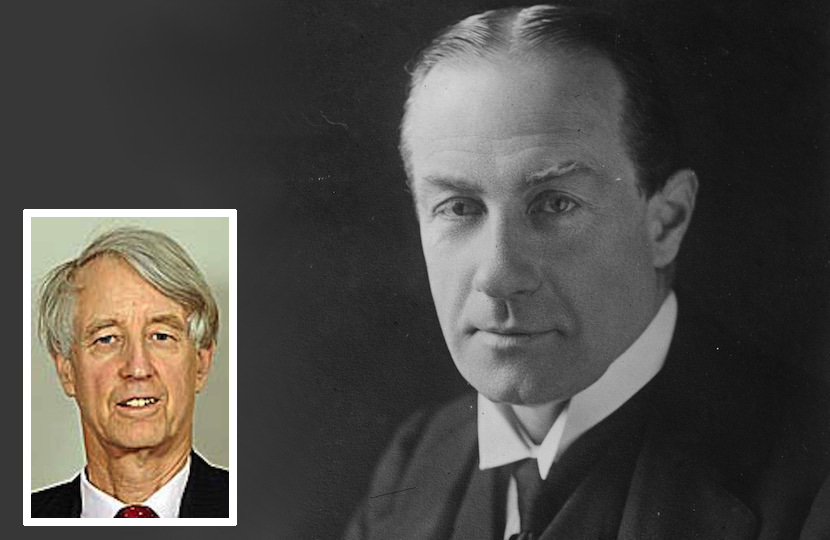 These two very different causes dominated the public work of the 4th Earl Baldwin, who died on 16 June.  Alistair Lexden recalled his career in an obituary (which appeared anonymously, as is the custom), published in The Daily Telegraph on June 29.

The 4th Earl Baldwin of Bewdley, who has died aged 83, combined a gentle, unassuming manner with strong convictions, working devotedly for the causes in which he believed.

As Stanley Baldwin’s only grandson in the male line, Edward Baldwin was always acutely conscious of his heritage. As a young man, he rebelled against it. His American-born mother told the diarist James Lees-Milne in 1979 that Edward had “always resented being a Baldwin, his grandfather’s prime ministership, and the title”, making his father, the 3rd Earl, “very unhappy”.

All that changed soon after he inherited the title in 1976. He took up his father’s unremitting campaign to clear Stanley Baldwin’s name of the charge that, being a lazy man, he had left the country practically defenceless in the face of Nazi Germany. Few in the 1970s doubted that analysis, since it originated with Churchill, who once said it would have been “ better if Baldwin had never been born”.

The 4th Earl found a powerful ally in the leading Baldwin scholar, Professor Philip Williamson of Durham University, whose detailed researches have now discredited the hostile view of the prime minister which held sway for so long.

The two men joined forces to produce  Baldwin Papers: A Conservative Statesman 1908-47, published in 2004, which brought together almost all Stanley Baldwin’s surviving political correspondence ,records of his conversations  kept by colleagues and other material to create an intimate portrait of the prime minister far removed from the old caricature.

Edward Baldwin’s beautifully written introduction to the volume paid eloquent tribute to his grandfather’s  character, “uncommon in its breadth and depth”, and to his “thoughtful and wide-ranging intelligence”. At his house in Oxford, he proudly displayed a large collection of memorabilia, including the smoker’s pipes which  had been the prime minister’s trademarks.

The crowning moment came in 2018 when the Duke of Gloucester unveiled a life-size bronze statue of Stanley Baldwin in Bewdley, Worcestershire, his home and constituency. His grandson, who had been closely involved in fundraising, hailed it as marking the final end of “the once prevalent mood that denigrated so much of what Baldwin had done in public life”.

Edward Alfred Alexander Baldwin, himself a son of Worcestershire, was born on January 3 1938. His father, (Arthur) Windham, a businessman and author (known widely by the affectionate nickname, Bloggs), inherited the title in 1958 from his homosexual elder brother, Oliver, who as a Labour MP had sat opposite his father Stanley Baldwin in the Commons, the only prime minister to endure such an experience.

Edward’s mother, (Joan) Elspeth, neé Tomes, was recalled by  Lees-Milne as a “beauty with keen blue eyes and the transparent skin of the very frail.” He adored her husband for his “enchanting dry sense of the ludicrous”.

After Eton and National Service in the Intelligence Corps, where Edward became a second lieutenant in 1957, he read Modern Languages and Law at Trinity College, Cambridge, graduating in 1961.

A gifted linguist, he taught French and German at  Christ’s Hospital in Sussex and later at Hemel Hempstead School, a large comprehensive. He would prove a firm supporter of the comprehensive model during a 10-year stint (1978-88) in education administration, working first in Leicestershire  and subsequently in Oxfordshire, where he was area education officer.

An accident to his knees while hill-climbing, one of his passions (along with tennis and ski-ing), turned him into an ardent advocate of alternative medicine after Harley Street failed to relieve the pain.  He described what happened in an article published in 2003 : “Hobbling with knee bandages and a mindset of incurability, I was directed by a colleague to a spiritual healer in a back street in Cambridge. He spent half an hour waving his hands over my knees while discoursing on his life as a schoolmaster and Harold Wilson’s politics…I shall never forget my astonishment at levering myself out of bed the next morning to find the pain had vanished.”

While not promoting this particular remedy widely, he became convinced that conventional healthcare practitioners should become familiar with complementary and alternative medical therapies. They should, he thought, be partners, not opponents. It was a theme that recurred frequently in his quietly, but effectively, argued speeches in the House of Lords, where he took his seat on the cross-benches in 1988. “So good to see a Baldwin in Parliament again,” Lord (Alec) Home said to him, a comment that gave him great pleasure.

Baldwin was a member of the Research Council for Complementary Medicine from 1989 to 1991. Between 1992 and 2002 he was joint chairman of the all-party parliamentary group on alternative and complementary medicine. He pressed for high professional standards maintained by inspection and regulation.

Throughout the 1990s, Baldwin chaired the British Acupuncture Accreditation Board, established to authorise degree-level acupuncture courses. He felt that that the reputation of alternative medicine gained useful recognition in a report of a Lords select committee in 2000, in which he played a leading part. The improved regulatory structures for which it called reflected his thinking. Only slightly less important to him was the campaign against fluoridation, in which he was prominent.

He much enjoyed lighter moments in the Lords. While settling up a bill with the cashier, he found himself “bumping bottoms with Brian Rix in our own Whitehall farce”.

He was one of the 92 hereditary peers who stayed in the Lords after Tony Blair’s reforms in 1999. Increasing physical frailty, arising from chronic fatigue syndrome, led him to seek formal retirement from the Lords in 2018 under a scheme introduced a few years earlier.

Baldwin’s first wife, Sarah James, an auctioneer, died in 2001. He is survived by their three sons, and by his second wife, Lydia Seagrave, a sculptor, whom he married in 2015.

His eldest son, Benedict, who lives in Sweden, born in 1973, succeeds as the 5th Earl Baldwin of Bewdley.