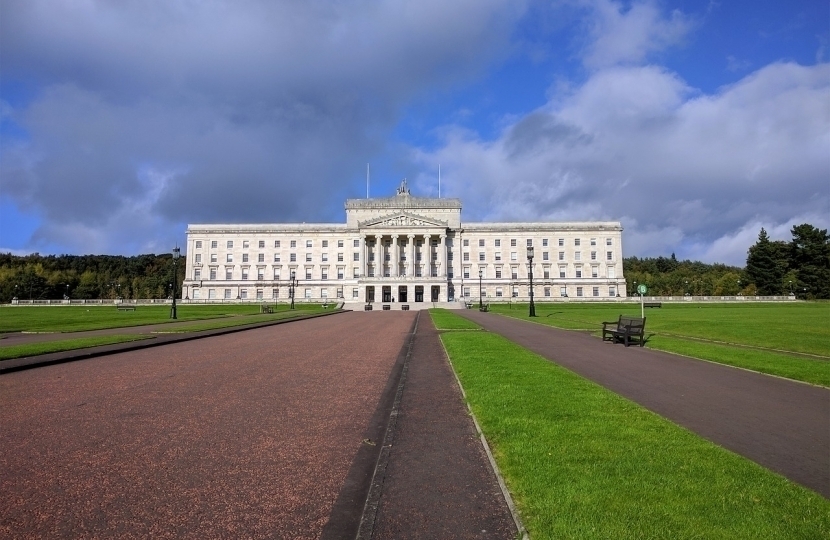 At 11:30 a.m. on a grey, overcast morning, a 21-gun salute rang out across Belfast Lough  as the Royal Yacht Victoria and Albert, with King George V and Queen Mary on board, approached  Donegall Quay in the City’s Harbour at the end of an overnight journey from Holyhead, accompanied by a magnificent naval escort. The great shipyards, symbols of Ulster’s (now declining) industrial might, stood silent in honour of the royal visit, an event of momentous importance as a new chapter of Anglo-Irish history began.

Their Majesties were greeted by the Belfast Harbour Commissioners, arrayed proudly in tail- coats, white waistcoats “with Harbour Gilt Buttons”  and top hats. These great men in Belfast life were a little taken aback when the glittering casket they brought on board with them was unceremoniously thrust aside , the illuminated address inside it unread, leaving the King without details of the port’s progress since his last visit in 1897. Their Majesties were in a hurry.

An open carriage, surrounded by large (and at times slightly disorderly ) cavalry contingents, sped through some of the  principal streets en route to the Edwardian splendour of the City Hall, the temporary home of the new Parliament, elected on Empire Day, 24 May . Loyal Ulster’s joy was unrestrained. “We really got a wonderful welcome & I never heard anything like the cheering”,  the King noted in his diary, that dry record of his activities which he maintained dutifully throughout his life.

Disloyal Ulster had its say two days later. A train transporting horses and men who had taken part in the royal procession was blown up. Three soldiers and a guard were killed, along with a large number of horses (others were mutilated).

Faint hearts at Buckingham Palace had urged the King to stay at home. Across Ireland as a whole, some 1,300 people—soldiers, policemen, terrorists  and innocent civilians—had died since the beginning of 1919 when the IRA, then (as later) the terrorist wing of Sinn Fein, had unleashed a vicious guerrilla campaign, which historians now tend to dignify as Ireland’s War of Independence. Britain’s response, which came to involve arbitrary reprisals for IRA crimes (summed up in three words “Black and Tans”), stained its reputation, to the King’s great distress, as he made clear to his Prime Minister, David Lloyd George, head of a coalition dominated by Unionists, as Conservatives were then known.

In Belfast, IRA attacks on property in 1920 helped reignite the sectarian violence, endemic in the city since the nineteenth century when industrialisation had attracted waves of Catholics from rural Ulster. In a particularly shocking incident, around 5,000 Catholics had been driven from their jobs in the shipyards in July 1920. Sectarian outrages, killing or injuring police and civilians, became depressingly familiar. Suffering was, as always, inflicted on Catholic and Protestant families alike.

No effort was spared to ensure the safety of the monarch and his wife. Cecil Craig, the devoted English wife of Northern Ireland’s new Prime Minister, Sir James Craig (later Viscount Craigavon), recorded the security precautions in her diary. “Luckily [the City Hall] was not very far, and precautions had been taken of every description, trusted men stationed in each house, and on every roof top, and the closest scrutiny of all in the houses, and of course in the streets too. Every alternate policeman faced the crowd but as there were troops in front, this was not specially apparent.”

Lady Craig naturally had much praise for her husband on this great day. It was not misplaced. An unyielding opponent of Home Rule (as devolution was then known) before the First World War, the Ulster premier was now keen  to make it a success in the six counties of Northern Ireland, for which he had become responsible.  Lloyd George’s Home Rule scheme, passed into law in 1920, removed the spectre of uncongenial Dublin rule over northern Unionists, first created by Mr Gladstone in 1886 .

One country, two Parliaments (which might possibly want to merge at some undefined future point): that was Lloyd George’s prescription for Irish harmony in the years ahead.  Craig was his conscientious  associate in implementing the plan in Belfast; sadly Dublin, where Sinn Fein carried all before it, had other, subversive ideas.

Craig fought a campaign of studied moderation for the Empire Day elections, the first to be held in the United Kingdom under a system of proportional representation. Partnership between North and South , each respecting the other’s boundaries, was his theme. To the astonishment (and disquiet) of many Unionist voters, he went to Dublin during the campaign for discussions with De Valera, recently an inhabitant of British prisons. He made clear that he would himself lead the Unionist delegation of ten on the Council of Ireland, a key feature of Lloyd George’s Irish settlement, when it was set up to oversee all-Ireland services like the railways and fisheries, and (if both North and South wished) work towards the reunification of Ireland under the Crown.

Goodwill abounded. Craig declared that “they in the North would be only too delighted to see the harbours of Cork and elsewhere turned into great engines of industry, the same as they had in the North of Ireland. But having said so much, let it be clear that there was to be no tampering whatever with the rights of Ulster.” On that basis, Craig won 40 of the 52 seats in the new Parliament, which was going to have to function without an official Opposition: non-Unionist MPs refused to take their seats.

That caused no disquiet among the loyal crowds as the royal carriage swept up to the Belfast City Hall on 22 June 1921, the tenth anniversary of George V’s coronation. The speech which the King delivered was like no other King’s speech in modern history. It contained no boring list of measures that would be debated and passed into law. The dreary language invariably used on such occasions was replaced by striking  eloquence, thanks to Edward Grigg, then one of Lloyd George’s Private Secretaries and later Lord Altrincham, an ardent proponent of responsible self-government within the Empire, who redrafted the speech four days before the King left London. George V’s official biographer, Harold Nicolson, recalled its reception: “Those who actually heard the speech never forgot the intense conviction with which it was delivered or the emotion it aroused.”

No one indeed could have listened without emotion as the King appealed “to all Irishmen to pause, to stretch out the hand of forbearance and conciliation, to forgive and forget, and to join in making for the land they love a new era of peace, contentment and goodwill.” He ended by recasting in memorable, idealistic terms the theme of partnership which Craig had deployed during the election campaign. “The future lies in the hands of my Irish people themselves. May this historic gathering be the prelude of the day in which the Irish people, north and south, under one Parliament or two, as those Parliaments may themselves decide, shall work together in common love for Ireland upon the sure foundation of mutual justice and respect.”

It was the most significant royal intervention in Irish affairs since George III blocked Catholic Emancipation at the time of the Act of Union in 1801, and so utterly different with its wholly constructive purpose. The speech received the national and international applause it deserved. When the King and Queen returned to London by rail the following day, Lloyd George and his Cabinet were at the station to meet them. “We have been deeply moved by the devotion and enthusiasm with which You were greeted”, the Prime Minister told the King.

Lloyd George was also impressed by an upsurge of public support in Britain for negotiations with Sinn Fein to end the armed conflict in Ireland on honourable terms. On 8 July, a formal truce with the IRA was signed in Dublin, paving the way for the Anglo-Irish Treaty of December 1921, which conferred dominion status on the 26 counties of Southern Ireland. The Belfast visit proved the key to Anglo-Irish peace outside Northern Ireland.

As the royal couple boarded their yacht at the end of the visit, the King said to his Ulster premier: “I can’t tell you how glad I am I came, but, you know, my entourage were very much against it”. James Craig replied: “Sir, you are surrounded by pessimists, but we are all optimists over here.” Their number diminished sharply during the months that followed. The truce in the South enabled the IRA to turn the full force of its enmity on the North. By the end of 1922, the death toll in Belfast amounted to 428 with another 1,766 injured, all now virtually forgotten by the English with their gift of historical amnesia. Dr A.T.Q Stewart, the doyen of Ulster historians, sought to remind them. “Grenades were thrown into crowded tramcars, into pubs, into churches and even into groups of children playing at street corners… Whole streets were burned down, and in Belfast some of the main roads became like sections of the Western Front, still vivid in the memory of many of the combatants.”

The IRA also killed—deliberately—the spirit of partnership which Craig had fostered in the Empire Day elections. Power, which might in time have come to be shared, was confined to the Unionist majority as long as the Northern Ireland Parliament lasted. The voice of Catholic complaint was never silent. Could this polarisation have been reduced, perhaps overcome? Only by the continued  participation of the Westminster government and the exercise of its restraining  hand.

The legislation under which the Northern Ireland Parliament operated stated that “the supreme authority of the Parliament of the United Kingdom shall remain unaffected and undiminished.” Partnership within Ulster required a partnership of parliaments. But Westminster in a telling phrase that has become current preferred to “devolve and forget”. It was a tragic error. It is a pity that the King did not warn against it in his great speech a century ago today.