On this day, 8 May, 75 years ago: Churchill's victory statement in the Lords chamber 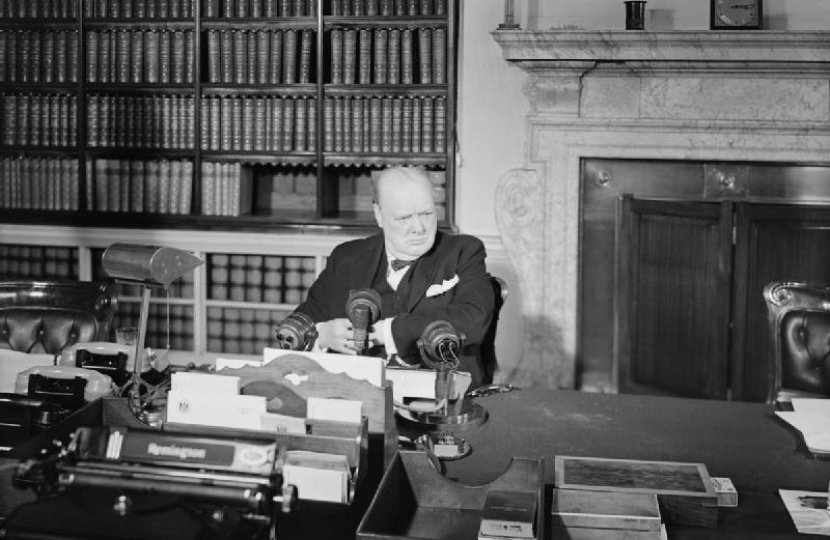 The tumultuous VE celebrations which took place in cities, towns and villages across the nation have been recalled widely in the media to mark their 75th  anniversary. But what happened at Westminster? Alistair Lexden explains.

Parliament met at its usual hour, 2.30pm, on 8 May 1945. MPs crowded into the Lords Chamber which had been their home for nearly four years, following the destruction of their own Chamber on 10/11 May 1941, the very last night of the Blitz. (They did not care for Church House, Westminster, their immediate place of refuge put at their disposal by the Church of England, and moved into the Lords in June 1941; the displaced peers settled with little complaint into the relatively commodious Royal Robing Room where on VE Day they occupied themselves usefully by holding a Second Reading debate on the Pontypool Gas Bill.)

Proceedings in the Lords Chamber began—as usual—with oral questions, which were answered by Sir James Grigg, an outstanding civil servant whom Churchill had suddenly transformed from the War Office’s Permanent Secretary into its Secretary of State in 1942 (he had been Churchill’s Private Secretary in the 1920s). The Prime Minister’s victory statement was to be delivered to the House immediately after being broadcast from No 10 at 3pm, in an understandable departure from the convention that statements should always be made first to Parliament.

Harold Nicolson, the well-known writer who was then a National Labour MP supporting the government, arrived just after 3pm, having lunched at the Beefsteak Club. He recorded his impressions of the afternoon in a long letter to his son Nigel, later a Tory MP and editor of his father’s brilliant diaries. “Cool and hushed the Chamber was, with Grigg answering questions as if nothing unusual were impending. The clock reached 3.15, which is the moment when Questions automatically close. We knew that it would take Winston some time to get to the House from Downing Street in such a crowd. We therefore made conversation by asking supplementary questions.”

The scene was also keenly observed by another remarkable diarist, ‘Chips’ Channon, the MP for Southend, widely regarded as the last pocket borough because of the extent of the Guinness family’s influence in it (Channon had succeeded his mother-in-law as its representative which he remained after parting from his wife who had always had second place to his homosexual interests which, as it happened, Nicolson shared). Channon noted: “Every seat was occupied; the Ambassadors were all present, peers queued up…The Serjeant-at-Arms was in Court Dress, the Speaker wore his robes with gold braid, etc. (I have never seen this done before—though I suppose it was done at the Coronation [in 1937]).”

Churchill, in an open car, made slow progress from No 10. His Private Office minuted: “The vast crowds of cheering people in Parliament Square made it almost impossible for the cars to get through, and he did not reach the Chamber until 3.30pm.” Channon recorded his arrival: “At last Winston, smiling and bent, appeared, and had a tremendous reception. Everyone (except the recently elected cad for Chelmsford [Ernest Millington, then representing the small Common Wealth Party, later Labour]) rose and cheered and waved handkerchiefs and Order Papers…Winston smiled and half bowed—as he often does…The House was profoundly moved” by the statement which he then read out.

It began: “Yesterday morning at 2.41am at Headquarters General Jodl [pronounced Jodel by Churchill], the representative of the German High Command, and Grand Admiral Doenitz, the designated Head of the German State, signed the act of unconditional surrender.” The statement went on to announce : “Hostilities will end officially at one minute after midnight tonight, but in the interests of saving lives the ceasefire began yesterday to be sounded all along the front, and our dear Channel Islands are to be freed today.”

The Soviet Union rather than the United States was singled out for particular praise amidst expressions of gratitude to the Allies. Stalin had wanted VE Day to be May 9, and Churchill was anxious to calm him. He said: “Today, perhaps, we shall think mostly of ourselves. Tomorrow we shall pay a particular tribute to our Russian comrades, whose prowess in the field has been one of the grand contributions to the general victory.”

Britain’s finest hour was recalled. “After gallant France had been struck down we, from this Island and from our united Empire, maintained the struggle single-handed for a whole year until we were joined by the military might of the Soviet Russia, and later by the overwhelming  power and resources of the United States of America.”

Churchill ended his statement by referring to the work that remained unfinished in the Far East. “Japan, with all her treachery and greed, remains unsubdued. The injury she has inflicted on Great Britain, the United States, and other countries, and her detestable cruelties, call for justice and retribution .We must now devote all our strength and resources to the completion of our task, both at home and abroad. Advance, Britannia. Long live the cause of freedom. God save the King.”

Churchill, the great Parliamentarian, then spoke to his colleagues from the heart. Nicolson recorded: “When he had finished reading, he put his  manuscript aside and with wide gestures thanked and blessed the House for all its noble support of him throughout these years.” “Some Members wept”, Channon noted.

Churchill closed his remarks by recalling what had happened when the end of hostilities was announced in 1918. The House “did not feel inclined for debate or business, but desired to offer thanks to Almighty God, to the Great Power which seems to shape and design the fortunes of nations and the destiny of man; and I therefore beg, Sir, with your permission to move: ‘That this House do now attend at the Church of St Margaret, Westminster, to give humble and reverent thanks to Almighty God for our deliverance from the threat of German domination.’ This is the identical Motion which was moved in former times.”

“We walked”, wrote Channon, “through St Stephen’s Hall and outside, where there was a terrific crowd, the sun was shining. There were bells, police carved a way for us, and we must have looked like a picture by Giovanni Bellini as we filed, 500 strong, into St Margaret’s for a short and impressive service.” The Speaker’s Chaplain read out the names of the 21 MPs who had died during the conflict. Nicolson gave way to his feelings. “The tears came into my eyes. Furtively I wiped them away. ‘Men are so emotional’, sniffed Nancy Astor, who was sitting next to me. Damn her.”

Members returned to the Lords Chamber only to adjourn. As Churchill made his way through Central Lobby, a child dashed out from the crowd. “Please, sir, may I have your autograph?” The great man ruffled the boy’s hair as he returned the book. “That will remind you of a glorious day.”

This article was also published on ConservativeHome here:

Alistair Lexden: On this day, May 8, 75 years ago. Churchill’s VE Day statement in the Lords Chamber.