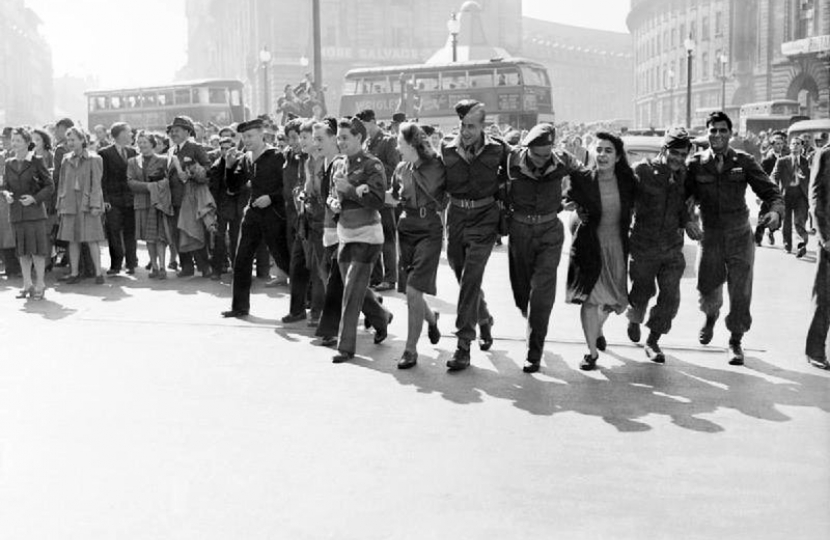 This is the third article by Alistair Lexden marking the 75th anniversary of great events in 1945. The others, which covered VE Day (8 May) and Churchill’s election defeat (26 July), can be found under their respective dates below.

The American atomic bombs, which were to bring the Second World War to an end, fell first on Hiroshima on 6 August 1945, and then on Nagasaki three days later. Japan’s unconditional surrender was announced on 14 August.

Clem Attlee’s government, formed after Labour’s landslide election victory the previous month, had been in office for under three weeks. The dramatic news from the Far East reached the new Prime Minister in a rather haphazard fashion.  During the evening of 14 August, Jock Colville, Churchill’s Private Secretary who had stayed on temporarily to help his successor, “saw on the tape-machine at No 10 that Japan had surrendered.  I brought the news into the Cabinet room where Attlee was closeted with Lord Louis Mountbatten [later Earl Mountbatten of Burma] who was professing Labour sympathies.”

To Colville’s amusement, Mountbatten, the left’s new recruit and a byword for vanity, later told everyone that it was he who had broken the news to a grateful Attlee.

At midnight, the Prime Minister announced the terms of Japan’s surrender. All Japanese forces had been ordered “to cease active operations [and] to surrender arms.” VJ Day had begun.

The thoughts of many grateful people in London turned at once to Churchill, who was living temporarily in a block of flats, Westminster Gardens (where 34 years later the bomb that was to kill Airey Neave would be placed under his car for subsequent detonation as he left the House of Commons). Early on VJ Day, a crowd gathered there “to see Papa and cheer him”, as Mrs Churchill wrote to her daughter, Mary.  Later “he got mobbed in Whitehall by a frenzied crowd.”

At 11 am, Churchill, along with MPs of all parties, was in the House of Commons, which met that day in St Stephen’s Hall, normally used as a  thoroughfare from the St Stephen’s  entrance to Central Lobby and beyond. The Speaker told the assembled members of “a strange coincidence. Curiously enough, the last time the House sat in St Stephen’s Hall was on 15th August, 111 years ago exactly.”

The cause on that occasion was the fire that destroyed most of the Palace of Westminster. On 15 August 1945, the Commons used this temporary refuge because the chamber of the House of Lords, where they had been meeting since the destruction of their own chamber in the Blitz, was needed for another purpose.

By happy chance, VJ Day coincided with the State Opening of the new Parliament, elected in July. The ceremony, severely curtailed during the years of war, was “restored to something of its pristine splendour by the revival of a carriage procession”, as George VI’s Private Secretary, Tommy Lascelles, noted in his diary.

“For the first time in history”, wrote George VI’s biographer, John Wheeler-Bennett, “two Speeches from the Throne were prepared, and signed by the Sovereign for the opening of Parliament” because the moment of Japan’s surrender had been impossible to predict. “One version of the Speech alluded to the surrender, the other omitted any reference to it.”  Lascelles had “a nervous moment lest Bill Jowitt, now Lord Chancellor, should produce the wrong speech out of his embroidered bag.”

The scene in the Lords chamber was recorded with characteristic panache and sharp eye for detail by the gay Tory MP, Chips Channon, in his famous diary. “ It was crowded with peers and peeresses. The Ambassadresses, all wearing extraordinary hats, sat on the right with the Duchesses. Mme Massigli, the French, wore a white tea tray.”

No ermine was on display: “the many new Socialists looked dazed and dazzled, and I was sorry for their sake that the peers were not in robes.”

It was very much  a dress-down occasion: “the King [was] in an Admiral’s uniform and with his cap on. The Queen, in aquamarine blue, though dignified and gracious, was dwarfed by her Mistress of the Robes, the Duchess of Northumberland, who looked far the more regal of the two. The Crown was carried on a cushion.”

Would the King be able to control his stammer? Though troubled by it much less severely than in his youth, he was always the subject of some worry on the occasion of a major speech. Channon praised him: “His voice was clear, and he spoke better than usual and was more impressive. But they say that the word Berlin had been substituted for Potsdam [scene of the recent conference of the victorious powers], which he could not have articulated.”

Lascelles called it “a dull speech” which put it firmly in the tradition of such declarations over the centuries, noted chiefly for the absence of fine, memorable language.

Apart from details of practical issues stemming from the end of hostilities, Parliament was told that it would shortly be asked to ratify the Charter of the United Nations in order “to maintain peace in accordance with justice and respect for human rights.”

The King’s Speech went on to make clear that the Labour government’s legislative programme would fulfil the commitments that all parties had given during the war (and repeated during the recent election campaign), to the Beveridge proposals for full employment, a comprehensive social insurance system and a national health service. To them were added Labour’s own plans for nationalisation (including the Bank of England), housing, planning, and more generous trade union laws.

Looking back on the ceremony, Channon reflected that “the Labour people were subdued and impressed and everybody behaved in an exemplary manner.” A further speech was to be required from the King later in the day when he broadcast to radio listeners at home and abroad. It went particularly well. “ Everybody commended it”, Lascelles recorded, “ and agrees that he has never spoken so fluently and forcefully.”

During the afternoon the King had the less arduous duty of receiving at Buckingham Palace a delegation of ministers and service chiefs, led by Attlee. Churchill was asked to join them, but “said he wouldn’t come unless he could bring with him those of his former colleagues who had served in the War Cabinet”, as Lascelles noted in his diary. It was the only instance of party political difficulty during the day. “He came alone, half an hour after the others had gone.” The King commented later, “I wish he could have been given a proper reception by the people”, by which he meant an appearance on the Buckingham Palace balcony.

The Commons reassembled, back in the Lords chamber once again, at 4 pm when Attlee repeated the Japanese terms of surrender “for I feel that it is fit and proper that they should be for ever on record in the annals of this ancient and honourable House.”

Attlee then moved “that this House do now attend at the Church of St Margaret, Westminster, to give humble and reverent thanks to Almighty God on the victorious conclusion of the war.”

Nothing marred the scene, which Channon recorded in his diary. “The Speaker, in full robes, led us through a good-natured crowd of cheering citizens. He was followed by Winston, who had a tremendous reception, and who walked with Eden, Attlee and Herbert Morrison.” After a short service, in which the Speaker’s Chaplain “moved the congregation to Thanksgiving and Dedication”, the bells of St Margaret’s were rung “in celebration of Victory.”

The  last business of the House on this historic day began at 5.18pm.  Attlee moved an address to the King “on the achievement of final victory.”  The new Labour Prime Minister used his speech to extol the blessings of constitutional monarchy in Britain. “It is the glory of our democratic Constitution that the will of the people operates and that changes which, in other countries, are often effected through civil strife and bloodshed, here in this island proceed by the peaceful method of the ballot box.”

Churchill himself could not have put it better. He added a few characteristically extravagant comments, proclaiming that “a brighter radiance illumines the Imperial Crown than any which our annals record.” With the two front benches expressing full accord, the House adjourned at 5.35pm.