Churchill and Bevan during the Second World War 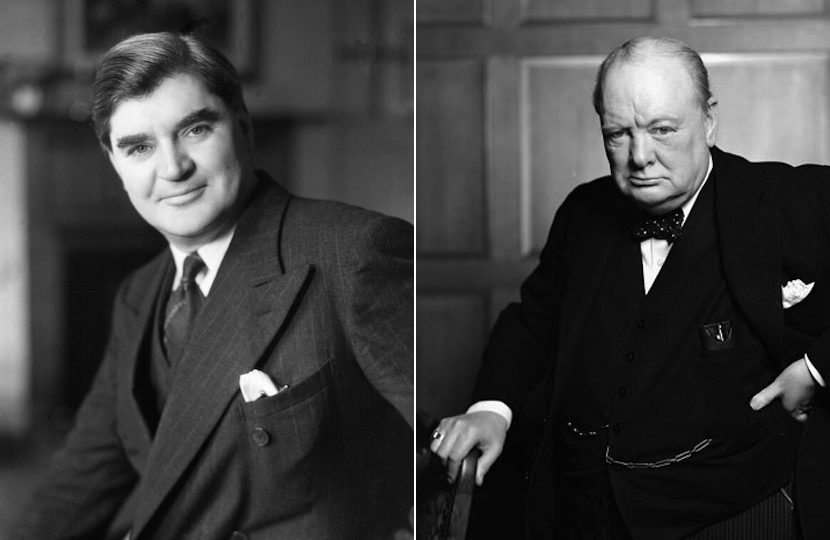 We look back on the Second World War as a time when the country was united behind Churchill and his national government, a coalition of all parties, in the pursuit of victory. The period from May 1940, when Churchill became Prime Minister, until May 1945, when Nazi Germany was defeated, is recalled with much satisfaction as regards the home front because the normal party political strife was suspended and everyone stood shoulder to shoulder.

This picture is altogether too rosy. Though the main parties did not compete with one another at by-elections, smaller parties put forward candidates and the government was consistently beaten by independents, most of them standard-bearers of the left. The initiative was passing from the Tory Party, which had  dominated political life during the inter-war years. Churchill himself came under serious criticism in Parliament.

His most determined and formidable critic was the ardent socialist, Nye Bevan, MP for Ebbw Vale since 1929 and throughout his career a brilliant speaker. Little-known before the war, he now made his mark. Many were shocked by the personal character of Bevan’s attacks on Churchill in the House of Commons, but the substance of those attacks commanded widespread respect, if not general agreement. He dissected the shortcomings of the government’s war strategy in an extremely effective and well-informed manner. No other critic of it marshalled such telling arguments or expounded them so eloquently.

The war went badly for Britain until the late autumn of 1942. Bevan intensified his pressure on Churchill; it reached a climax in a debate on a motion of censure on the government’s conduct of the war on 1st and 2nd July 1942.  Churchill won it overwhelmingly, but failed to allay the doubts felt by many MPs. Harold Nicolson, then a National Labour MP and supporter of the government, recorded in his diary: “The second day of the vote of censure debate. Aneurin Bevan opens with a brilliant offensive, pointing his finger in accusation, twisting and bowing… Winston sits there with a look of sullen foreboding… He gets his vote of confidence by 476 to 25, plus a great ovation afterwards. But the impression left is one of dissatisfaction and anxiety.”

Dr John Campbell, a leading historian and expert on the subject, writes: “There was something heroic in the persistence with which Bevan insisted on providing critical opposition at a time when the official opposition [Labour] interpreted their function principally as to give the government loyal support. Bevan made parliamentary government a reality in the Second World War”.

Along with John Campbell and Neil Kinnock, the former Labour leader, Alistair Lexden was interviewed for a BBC radio programme on this little-known aspect of political life during the Second World War. The programme is due to be broadcast at the end of January 2021. Further information will follow.