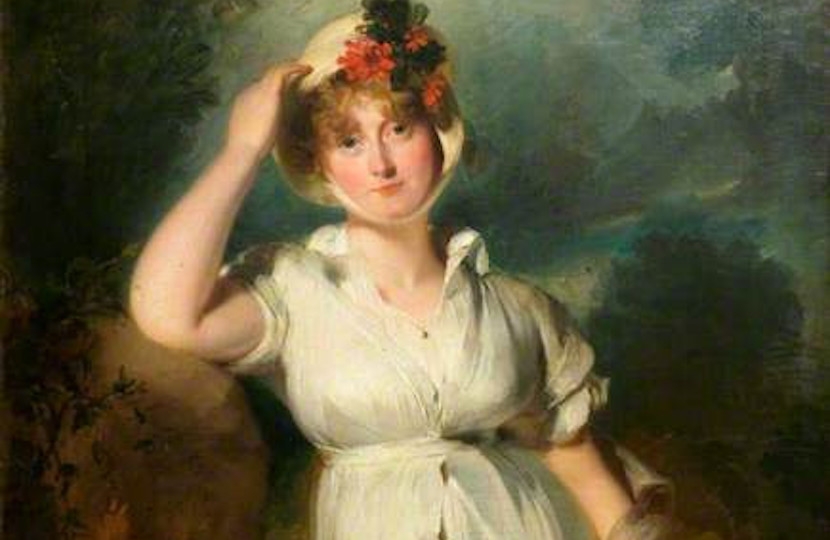 Much has been written about the dissolute private lives of the Prince Regent, later King George IV, and the wife he rejected, Queen Caroline, who was famously barred from the Coronation ceremony in Westminster Abbey in 1820, dying shortly afterwards . In the book reviewed here, the scandals are considered afresh and at length—against the background of the Napoleonic Wars—from a new perspective, that of a hitherto forgotten member of Caroline’s court, Ann Hayman.

My Dear Hamy: Insights and Intrigues from the Court of Caroline, Princess of Wales
By Martin Thomas
Published by Bridge Books, £25

This long, absorbing book of 700 pages is the result of an extraordinary coincidence. The author, Martin Thomas, Lord Thomas of Gresford, a prominent Liberal Democrat peer (currently serving as his party’s spokesman on Welsh affairs) and QC, happened to be spending an evening alone at the Reform Club. In its well-stocked library he found a late-nineteenth century book on Princess Charlotte, daughter of the future King George IV, whose tragic death in 1817 following the arrival of a still-born child deprived England of a future Queen.

As Martin Thomas explains in his preface, “the book contained mention of Ann Hayman, affectionately called ‘Hamy’, a former sub-governess of the Princess Charlotte and later Privy Purse to Princess Caroline of Wales, the estranged wife of the Prince Regent, later George IV”. Letters quoted in the book made clear that Hamy had lived in his village of Gresford in north Wales. Indeed, hers “was the name on the original 1804 deeds of my home at Glasfryn” in the village.

Lord Thomas set out to discover all that he could about the woman who had built his much-loved home. The wide range of libraries and archives in Britain and the United States, which he consulted in his spare time over a period of seventeen years, have yielded an astonishing amount of material, enabling him to recount in detail the life and times of Glasfryn’s forgotten creator. A picture of the interior of the house today reproduced in the book is dominated by a harp which Martin Thomas plays with distinction. Hamy, steeped in Welsh traditions, would have approved.

She emerges from his pages as “a sensible and humorous Welsh-speaking lady of good family” who thoroughly deserves this affectionate biography. She moved back and forth happily between her many lively and cultured Welsh friends in and around Wrexham, and the dissipated court circles in London into which she was drawn on the recommendation of influential Whig friends. By nature uncensorious, she went calmly about her duties as the royals collapsed drunkenly around her.

She remained unmarried, but not unloved. The many fascinating records that Martin Thomas has unearthed include numerous letters to and from the first Earl of Minto, a married man with a bevy of children on his Scottish estates, who became a highly successful governor-general of India during the Napoleonic Wars. Ample space is devoted to his imperial exploits which filled Hamy with pride. Their letters contain quite strong hints of a sexual relationship without providing conclusive evidence. Even with abundant surviving material it is often impossible to be certain about the character of human passions in the past.

Hamy’s tantalising discretion contrasted sharply with the brazenness of Princess Caroline, whom she served devotedly as her treasurer, struggling constantly to make ends meet. Caroline’s tempestuous love life occupies a large portion of this massive book. A vast amount of information about her dalliances was amassed by official inquiries through which the husband who loathed her(the feeling was mutual) hoped to bring about her downfall, while continuing merrily with his own dissolute life.

Martin Thomas examines the voluminous evidence with the experienced eye of a leading QC. On one of the main charges he concludes that “the probability is that the Princess did indeed become pregnant in the late spring of 1802 by Sir Sidney[Smith, a popular naval hero]but suffered a miscarriage in late October”. On other charges brought against her in 1820 when she appeared before the House of Lords as Queen, Thomas finds “the quality of the evidence was pathetic”.

The King did not get his divorce, but the Queen did not live to exploit his embarrassment. Looking back after her death in 1821, the faithful Hamy wrote that “ it was impossible not to feel affectionate interest in her, even when her defiance of all propriety grieved us all to the heart”.

For her part, however, Caroline was unable to develop an affectionate interest in her daughter, Princess Charlotte, who would have inherited the throne in 1830 if she had lived. Starting on 3 November 1817, Charlotte spent 52 hours in labour before her still-born boy appeared, her physician refusing to authorise any artificial aid to induce the birth. There is no more shocking passage in this book. A year later the doctor shot himself.

Hamy lived on contentedly amongst her Welsh friends, reaching the age of 97. This remarkable book is her second memorial. Martin Thomas concludes by assuring his readers that “ the house which she built still re-echoes with the sound of piano and harp, and when friends are gathered together, with festive singing”.