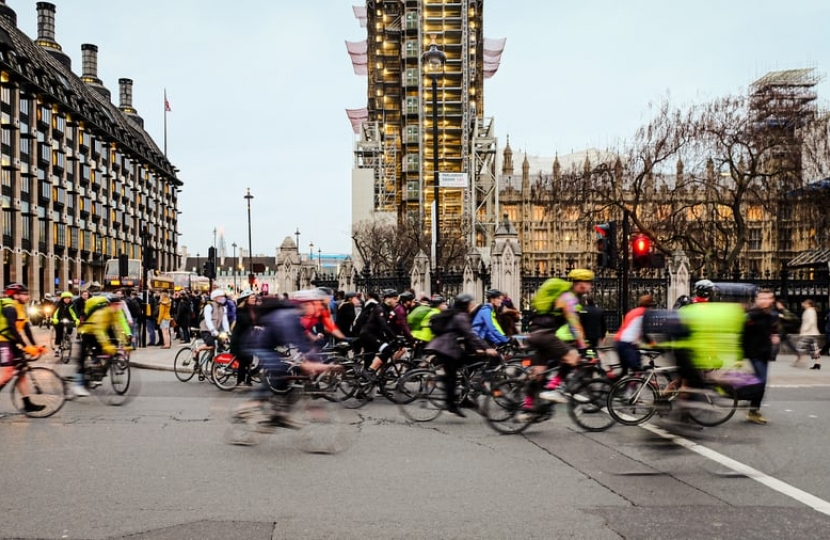 Few dispute the number and extent of the problems caused by cyclists who ride on the roads –-and pavements—without bells, but they are rarely discussed in Parliament. Alistair Lexden has raised this widespread, dangerous and selfish habit on several occasions in the Lords. He returned to it through an oral question on 27 April.

He asked the Government “what can be done about the huge number of cyclists without bells, who do not lack aggressive and foul-mouthed elements, some of whom seem to prefer pavements to their designated cycle lanes, having presumably discarded and thrown away the bells which are required by law when bicycles are first sold? Is not this shockingly irresponsible?”

He received the following reply from the relevant Minister: “My noble friend is right that we must do something. The core is education and training. In the Government’s cycling strategy, Gear Change: A Bold Vision for Cycling and Walking, we said that every adult and child who wants it can be trained on how to ride a bicycle safely.”

Is voluntary training for adults and  children likely to make much difference? It seems very unlikely. Other members of the Lords who took part in the discussion said that more must be done. One Labour peer, who was nearly hit by a cyclist without a bell, said: “Surely all cyclists should be required to have bells on their bicycles and should not be allowed on the roads without them.”  A Conservative said: “Outside England, bells are required under the Vienna Convention on Road Traffic 1968, so why do we not have that requirement in England as well?”

To these questions, the Minister replied unhelpfully that “the Government are not about to mandate bells on bicycles. That would be disproportionate and it is unlikely that any enforcement would be a police priority”. Many people of all Parties will be shocked by the Government’s attitude—and rightly so. It is evading a serious problem, and must be pressed again to take effective action in future Lords debates.